I don't remember when I fell in love with music but I was young.  I remember my Mum had a story that before I went to school - so before 5 at least - I was sat on the settee at home and she came in to turn off the TV which had some chamber music or such like playing out... I asked her not to turn it off as I was listening to it.

My real first memories are of a Dansette like record player being replaced with a huge great sideboard of a "stereogram" this was placed in the corner of the front room under the TV.  Soon I had my Mum's collection of 45s crashing down on each other from a great height on the autochanger and was stood in front of it with a metal "guitar" (toy) over my neck "playing" along.  Soon I was buying my own records - the first single I remember buying was Ha Ha Said the Clown by Manfred Mann.

About 10 or 11 years old I started to get more seriously into music.  Supertramp were a major initial influence - they were "my band" I discovered them for myself - i.e. they weren't a band others in the family liked.  I was also into many others - Hendrix, Yes etc. weren't far behind.  At 11 my Mum and Dad bought me an acoustic to learn on - some Eastern European made thing I think.  I went to lessons which were a group of us with a teacher at the front at lunchtimes at school.  That didn't work - I just couldn't get it for some reason and was highly disappointed.  My Mum sought out a young lady teacher local to us who was a friend of a friend and an old school colleague of my elder sister.  She taught classical guitar which my Mum thought was obviously the right way to be taught - it was for me actually.  I got it quickly with her help and was soon romping away.

So I was a classical guitarist, playing oboe as well... I could have gone a classical only route easily.  But I was listening to rock of all types.  I formed my first band with some mates at school / the church and we bashed out some awful stuff I'd written and one or two covers...   I'd bought via my Mum's catalogue a Columbus Strat copy by now.  My songs were called things like "one way ticket to nowhere" and "national violence"... about a year later punk exploded.  I tried to be in a punk band but that failed and I lost faith in punk anyway as the designer t-shirts came along so retreated to rock and prog rock, now most of my listening was Rush, Yes, Zep etc.  I nearly was in a band that went on to be in Quadrophenia the film.

But a couple of years later another school band took my attentions.  A mix of covers and selfpenned stuff, most of that from me as I found learning other peoples stuff without music difficult and preferred writing my own.  I left that band as I was fed up with the direction it wasn't going in - that was a painful experience as my brother had become "manager" and had got us a gig or two but we weren't good enough really.

At 16/17 I was writing a "concept album" based on the Narnia story.  That didn't go anywhere but some of the material I liked - I revamped the lyrics mostly now influenced by the King Arthur stories and Unforgotten King was born - i.e. I had a chunk of material I'd written and needed a band.  I'd jammed with a set up that had failed again a few months before - asked most of that line up to join and we were off.

Sadly we had a year of some success but I let it all fall away...   I was a right arsehole then, I wanted to be told how critical I was to everything but kept telling everyone how bad I was... in the end that band disbanded then reformed... with out me in it!

I didn't do anything for ages - then I got a Fostex 4 track portastudio and in my new married home a studio was born in the back bedroom... synths came in, sequencers etc.  and I had one of my periods of most productive time culminating in an album of stuff I finished off but did little with.   Looking back a lot of it was crap!

Periods of learning a load of covers from magazines etc. came next and finally as I hit my 40s I got into a couple of bands.  One I formed with a singer and bassist but after some months that folded as we didn't have a cohesive direction.  From that I joined another covers band and did a gig or two but found the direction of the material away from whatever I suggested to other stuff... so I left that too... that was just before I stopped drinking too so that was a messy time.

In 2009 I thought I'd get a band together - I talked to a load of people but again couldn't find the magic of people that gelled with my view of material etc.  So I saw a Rock-Till-You-Drop Sunday acoustic thing being set up - Colin Gillman played one and I thought - get over yourself have a go.  So a hastily created set of material was got together.  I enjoyed it and it was a reasonable success, well Toby was happy to offer another set in 3 months and Scooter Forums radio via 4Dinners wanted some material to play.  So I started recording and writing more...   in a year I had performed other gigs and had recorded an album including some time in a professional studio.

Work returned to get in the way in 2011 and I don't get the time I'd like to spend on music right now but that is the position today... I still mostly like writing my own stuff, why sing something that is someone else's when you can do your own...

Go to my Reverbnation site to have a listen...

Thought I'd update here to bring more up to date where I am.  I've been writing occasionally and playing at some open mic nights in Rochester - the Nags Head has one on the second Wed of every month with is originals only - suits me well.  I was on the bill for the inaugural Newington Festival in April 2012.

I also started a little jam band with two other people (bass and drums) doing covers currently.  We're very loose on plans or not for that - we'll see where that may or may not develop in due course.

The band thing is stalled at the moment due to me not getting my arse in gear over it, the other two clearly looking to me to drive it forward but my momentum has been in completeing my second album The Man Inside which is now available as a CD or MP3 download from Rock-Til-You-Drop records.  Also on that site is a free download of some of highlights from my first album Within.

Popular posts from this blog 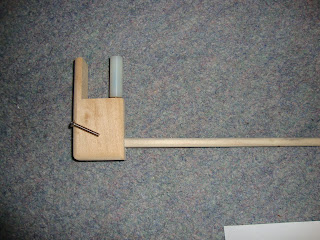 Remember my 12 string needing to have it's overbelly reduced?  Well I ordered a Bridge Doctor  from StewMac in the USA which arrived in a couple of weeks. Here is the bridge doctor before installation Here is the action before - about 5mm on the bass side and about 3mm on the treble. The guitar on the workbench Hole drilled - I got a 1/4" brad bit for the outer hole and used a cocktail stick marked at 1/8" as my depth gauge.  You get a little plastic dot you can inlay over the screw once finished - I may do that later when I get happy with it.  Luckily I have a local little hardware shop that stock imperial drills and are cheaper than the big stores... no doubt as the stock has been there 20 years! Set the doctor to the best width - the circular plastic bolt holder has three settings - I used the widest you can see to allow string clearance on the 12 string - on a 6 string the middle would probably be best setting.  The doctor installed - t
Read more 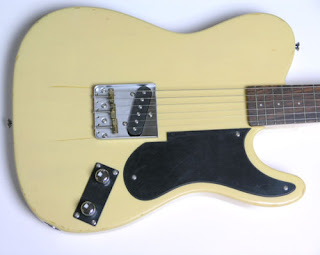 So in keeping with the title of this blog something about guitars for a change... actually 3 things. Firstly - CH Guitars have some different from the run of the mill guitars for sale via eBay at the moment.  These include this take on the Fender Broadcaster (to be renamed Telecaster) prototype that Leo first made.  Given only one pickup it is more an Esquire-a-like I suppose. Secondly - how about this.  A 12 string Les Paul - ooohhh!  Seriously I'm mostly putting this up here in the hope one of you will buy this and stop my head going "buy it... buy it"... The good news is the prices - £249 for the Tele and £349 for the Les Paul!! Go check out there is also a nice looking sunburst Fender Tele Deluxe copy for only £299 as well. Now here is the coolest thing I've seen in technology in ages.  TC Electronic have a long established reputation for quality kit.  They have introduced a new range of compact effects pedals with the "Toneprint" featu
Read more

GGBO Episode 10 - The Final Finale! Set up and finishing touches.

The finale - I realise I've been an idiot on the set up get that all sorted and then test it out.
Read more