Just mucking about with the new build.

Rhythm was on P90 with a chorus pedal on into a Vox Looper.

Lead part is again the P90 bit of delay and compression on it and boost on the drive channel or my H&K Statesman Dual 6L6 amp.

First order was to sort out the scratchplate.  I had a single ply black one left over from a previous project so I used that.  I made a paper template to start and used that to cut the larger p90 hole put and adjust around the bridge and control panel. 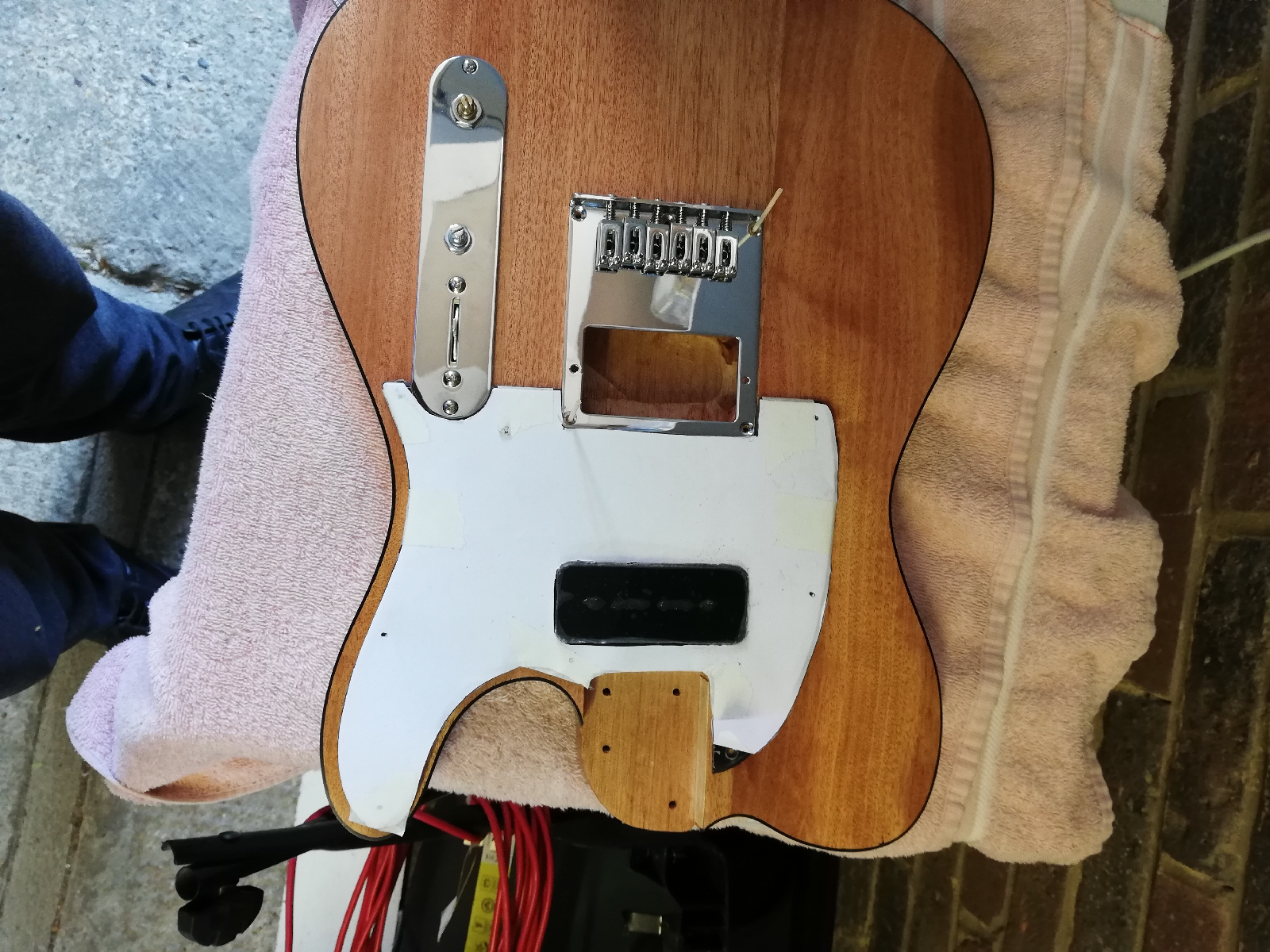 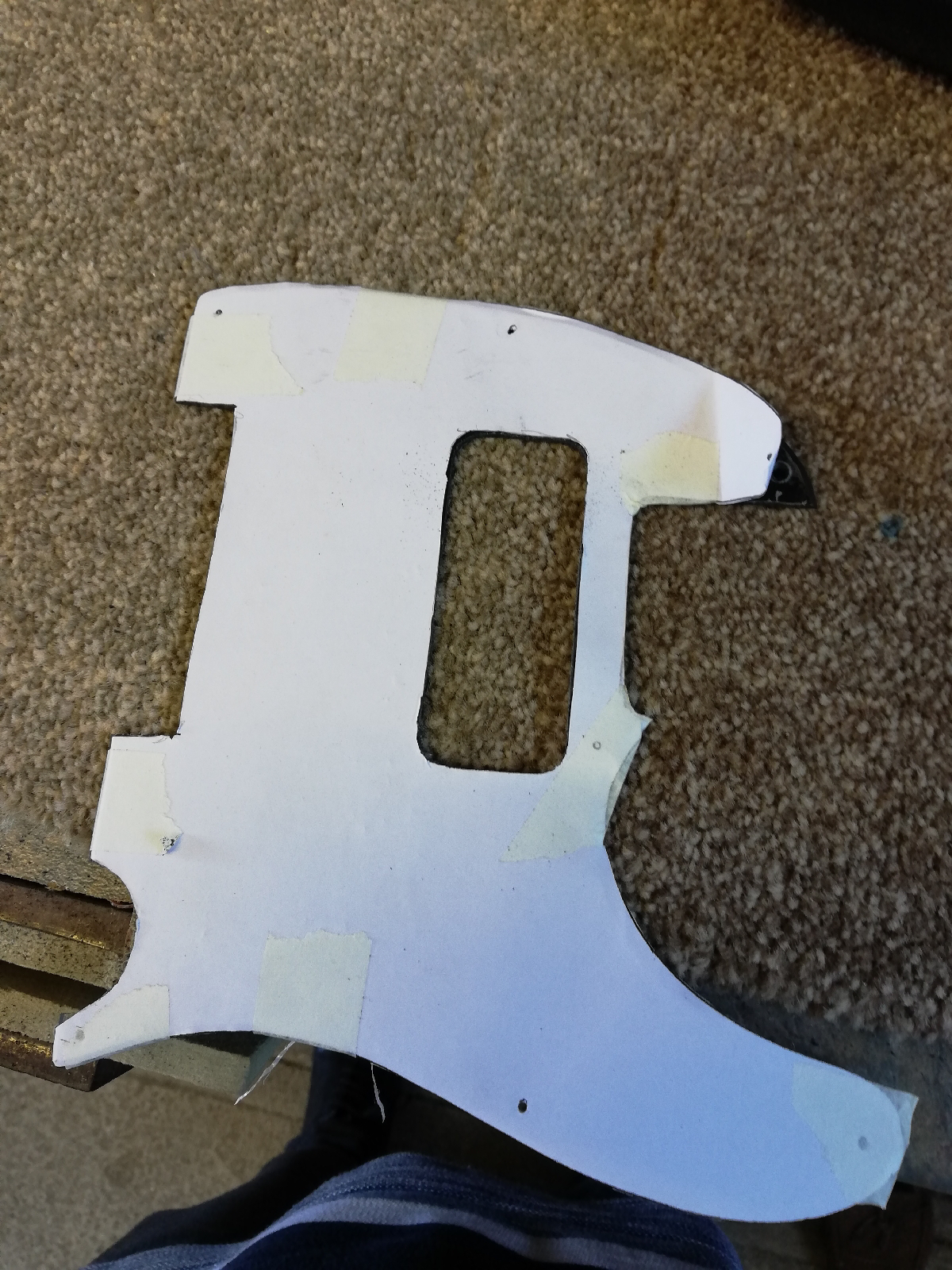 Then onto wiring in the pickups.  First problem was the hole into the control cavity was too small for the cables to all fit through. Luckily I bought some very long wood drills for this type of problem. I was able to work up through the sizes to get it large enough.
Then to soldering.  Not my favourite exercise and I think I'm rubbish at it.  Still after some deep breaths going a step at a time I got there plugged in for a tap test and blow me down. It all worked properly first time! 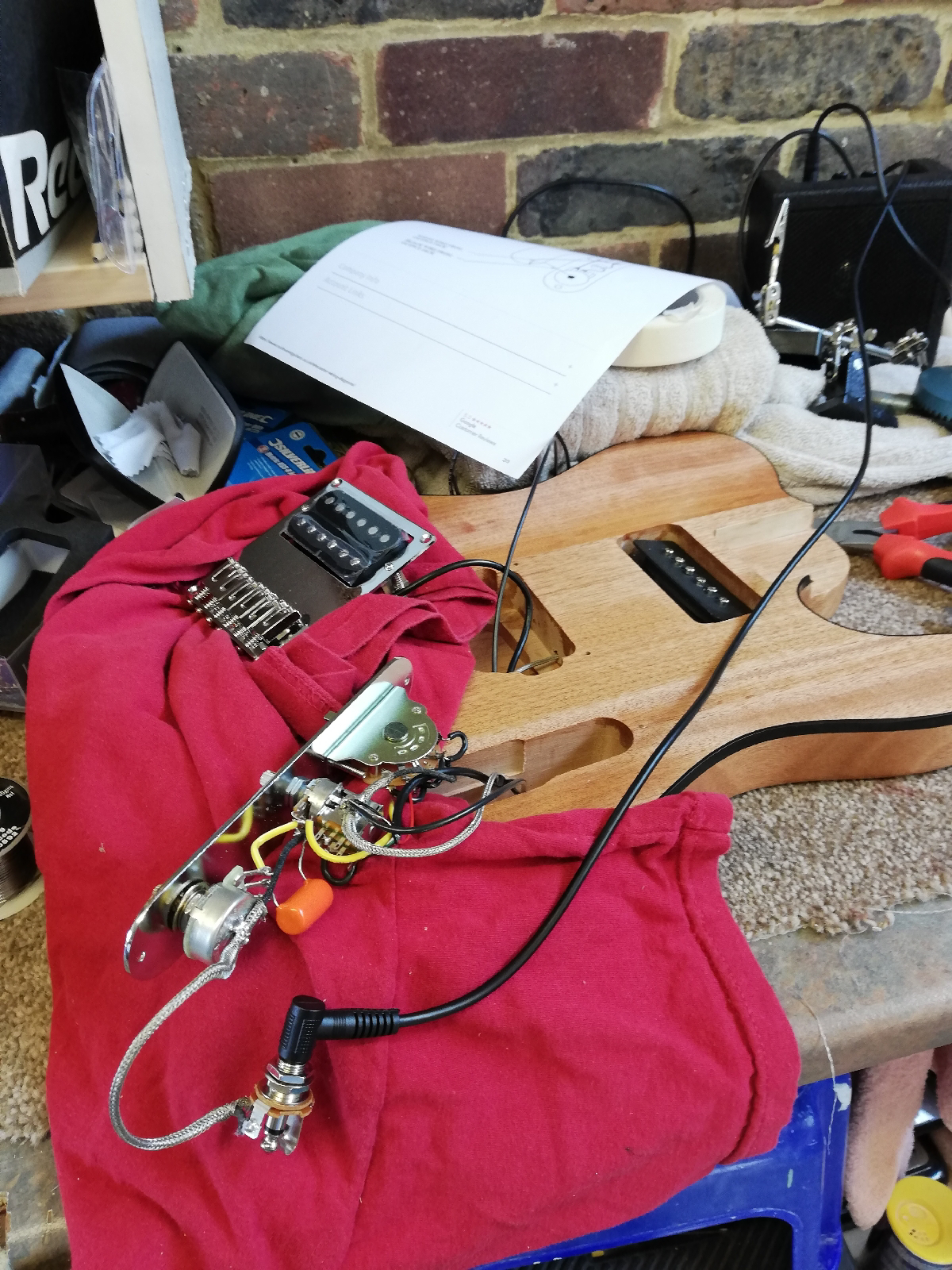 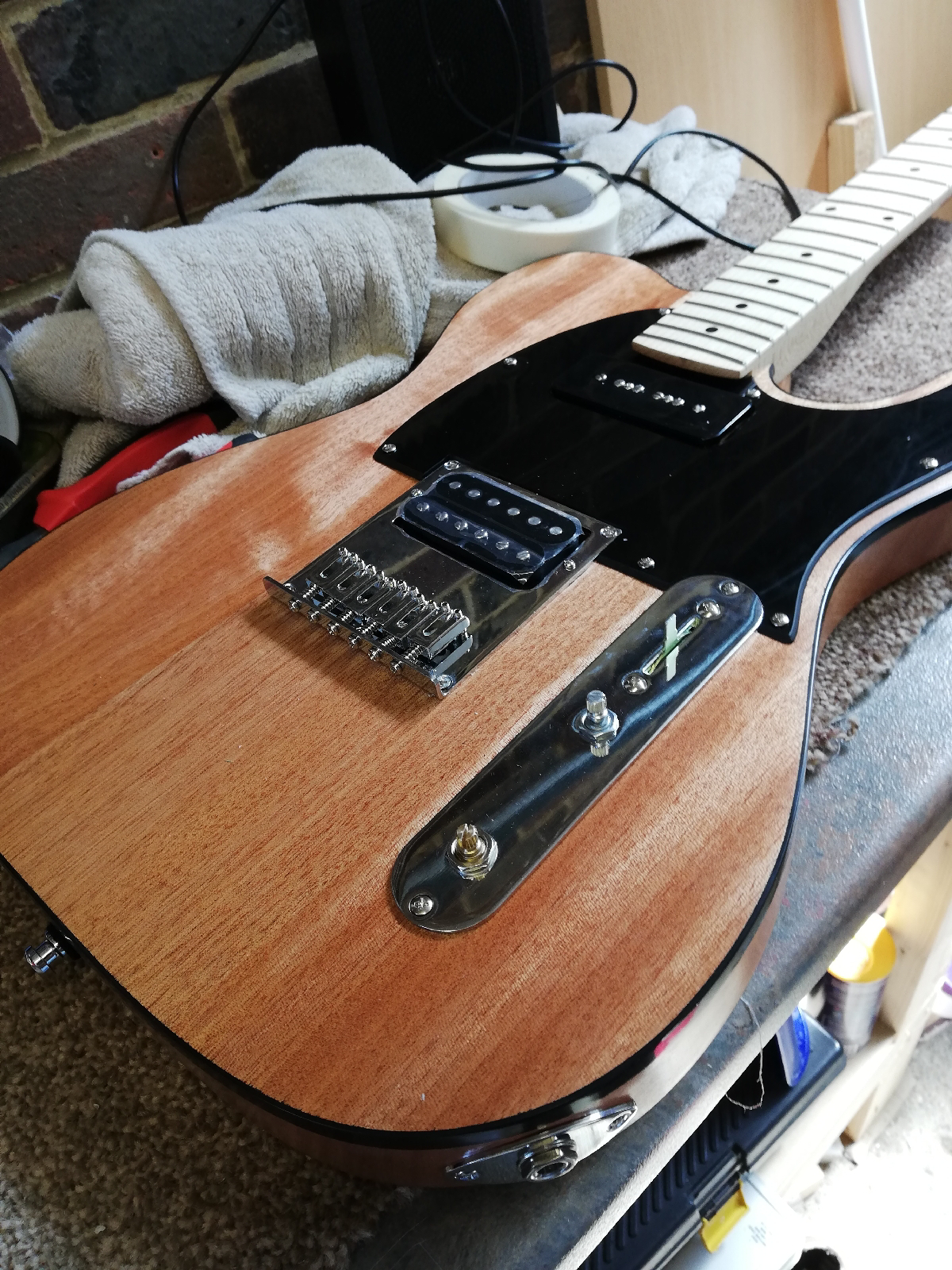 Ferrules inserted. Defo prefer these "vintage style" much neater to cover any little tear out. 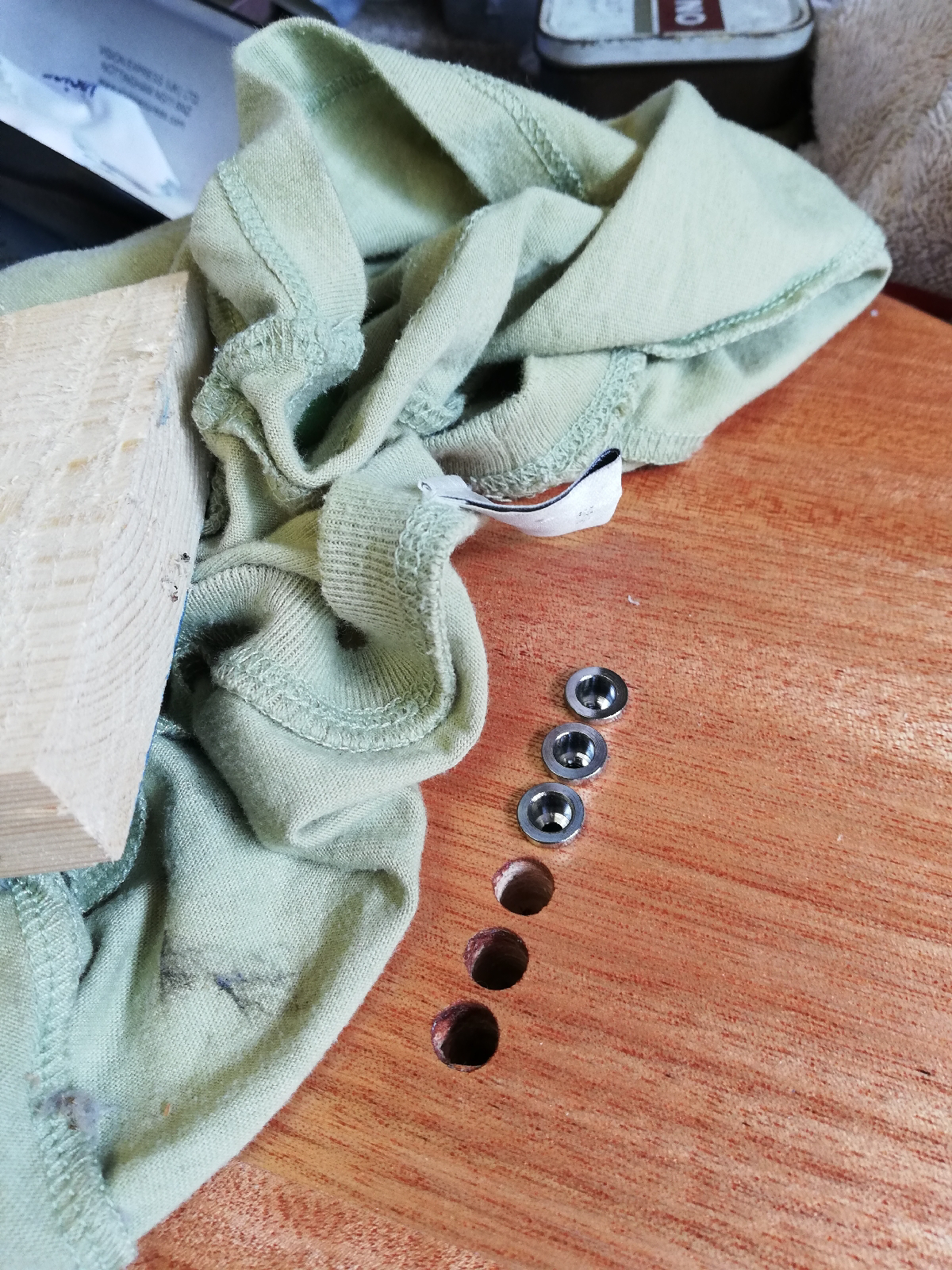 Finally string up and plug in.
Well sort off not surprisingly there's a whole host of set up issues needing addressing, the neck has no relief for a start,  nut way too high, bridge way too low.  But for another day I've done enough today. 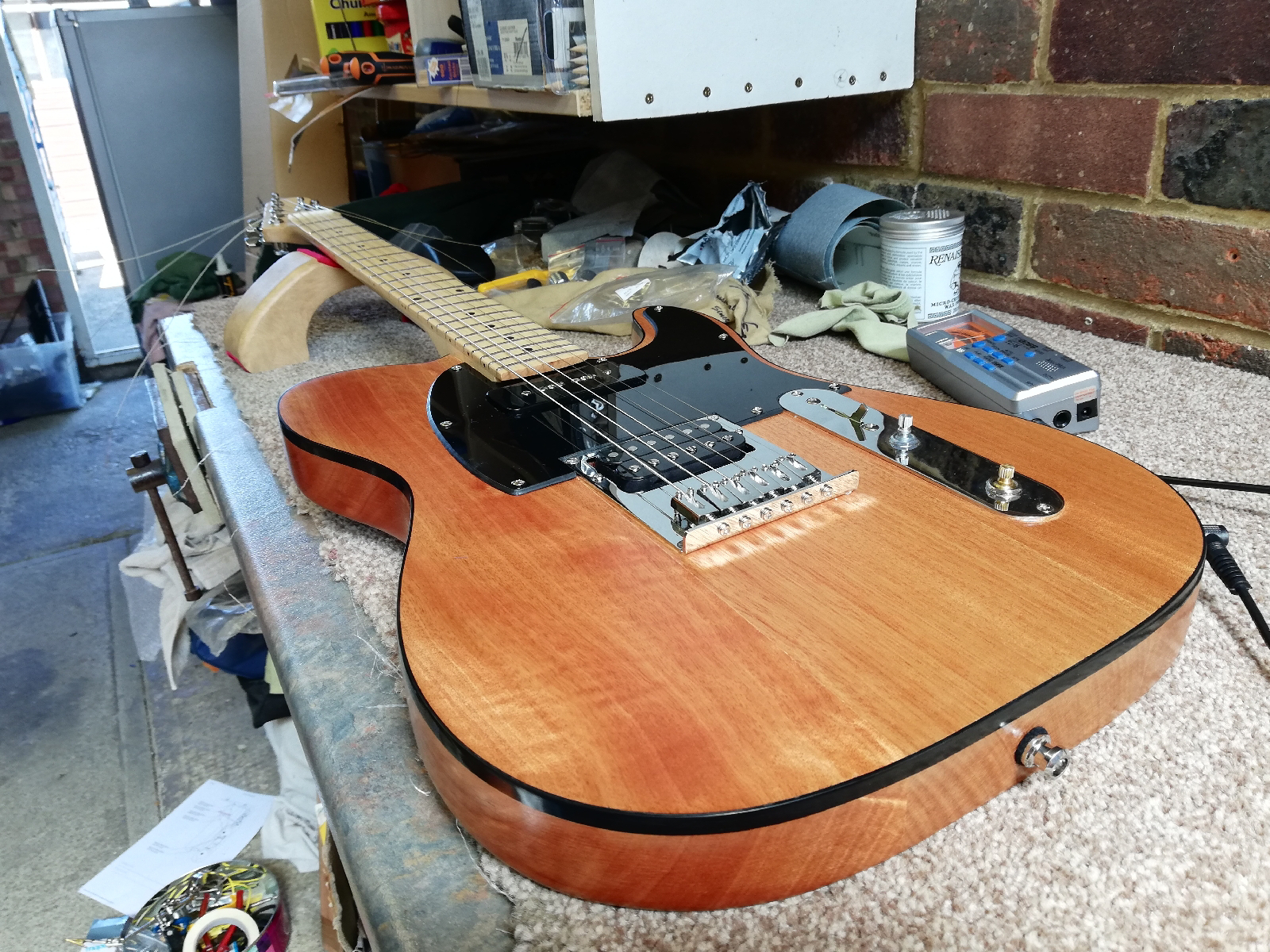 The guitar is finished.  No not complete I meaned it has finish on it 😂😂😂
Here's a couple of pictures
   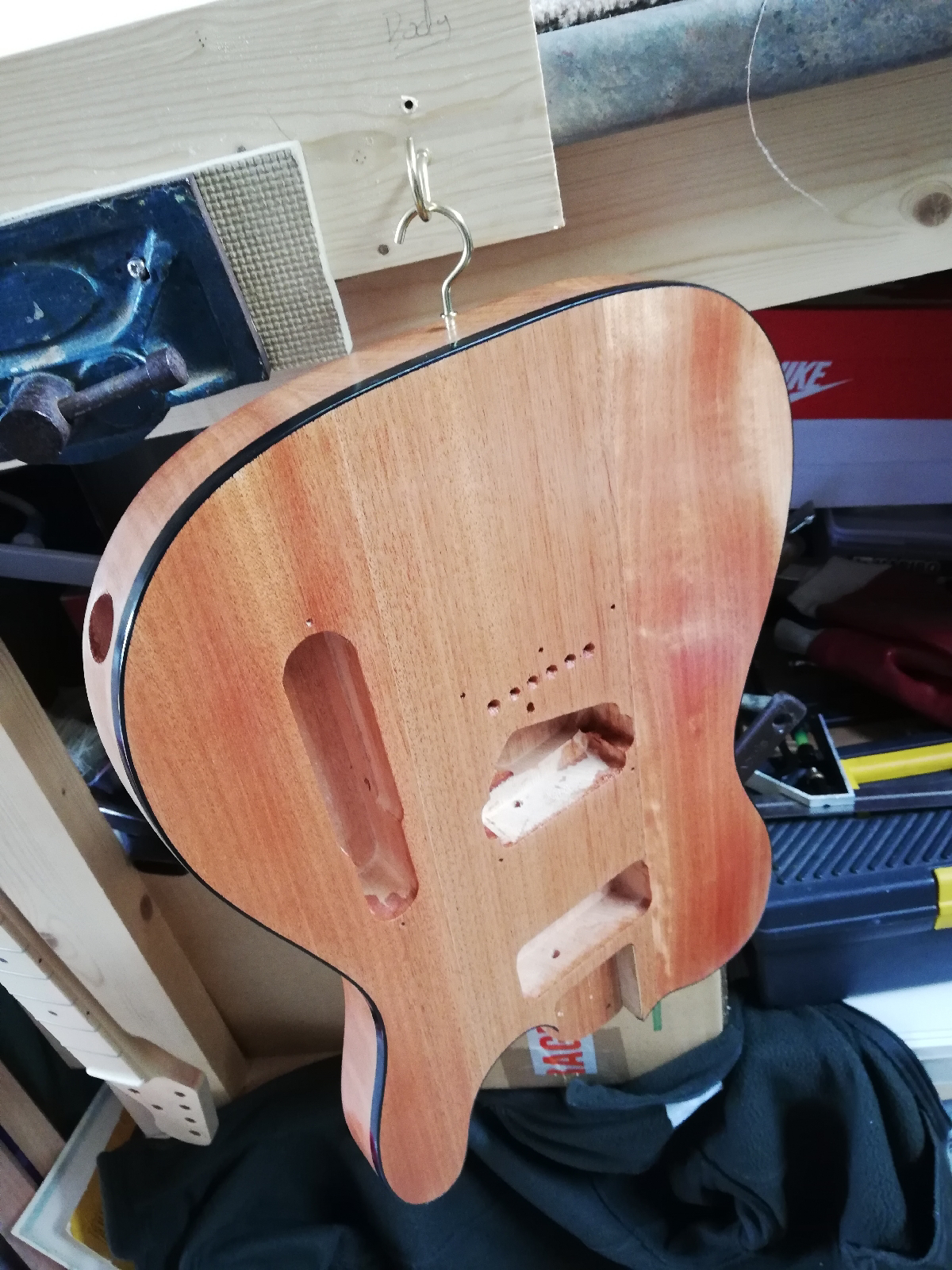 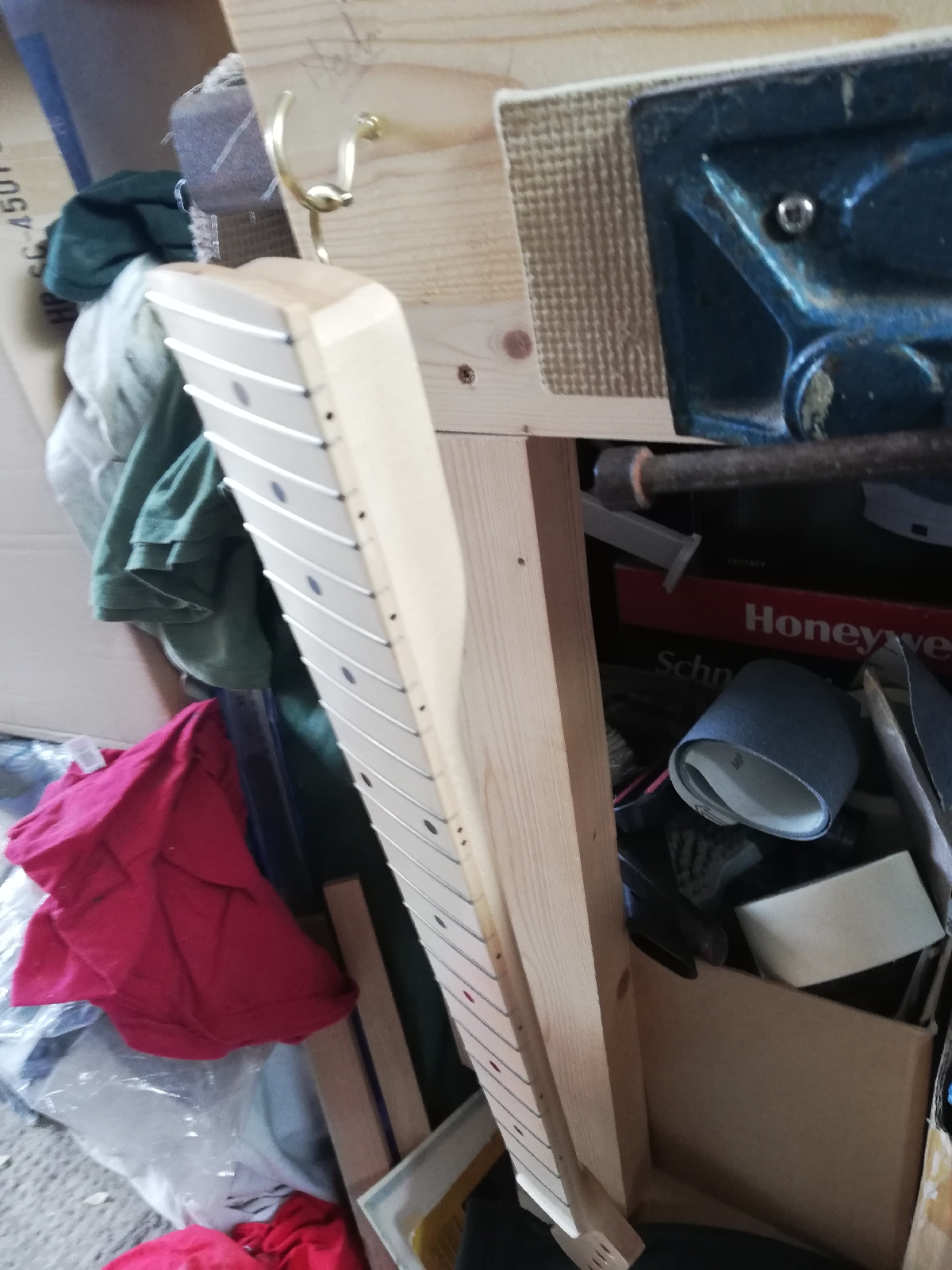 The neck and body curing.
I used Crimson Guitars Guitar Finishing Oil which I really like. I sanded to 320 grit.  I then applied 2 coats of Crimson's Penetrating Oil and then 4 coats of their High Build Finishing Oil.  The end result is very pleasing to me.  Here's the body The quilting on the top bit was a real pleasant surprise and does have that shimmer / movement effect.  Looks much more expensive than it was!
I will give it some additional wax polish using Renaissance Wax once the oil is cured for a good few days.
Next up was soldering the pots and switch up.  I always tackle soldering with dread it's definitely not my forte!
Anyway here is a couple of pictures. 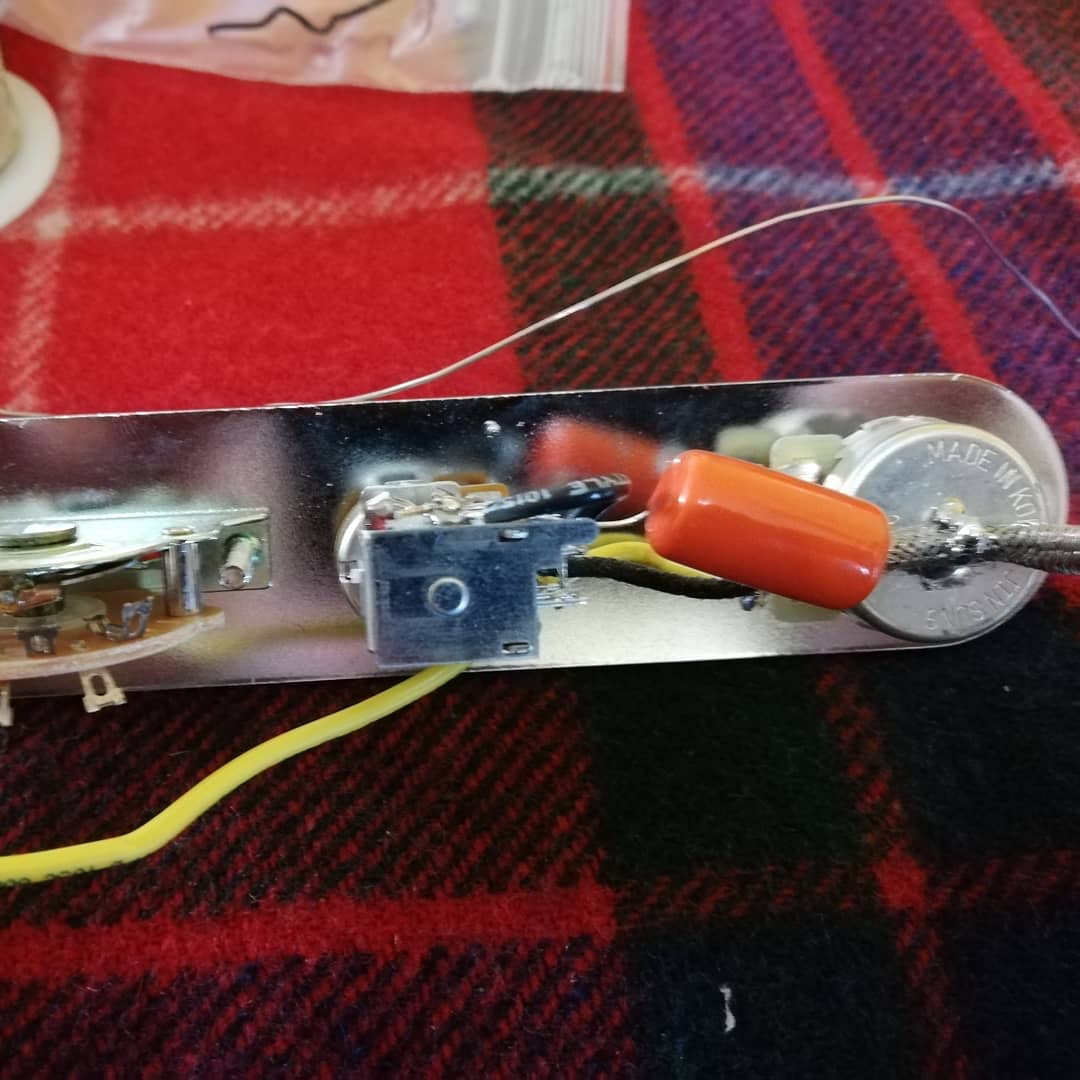 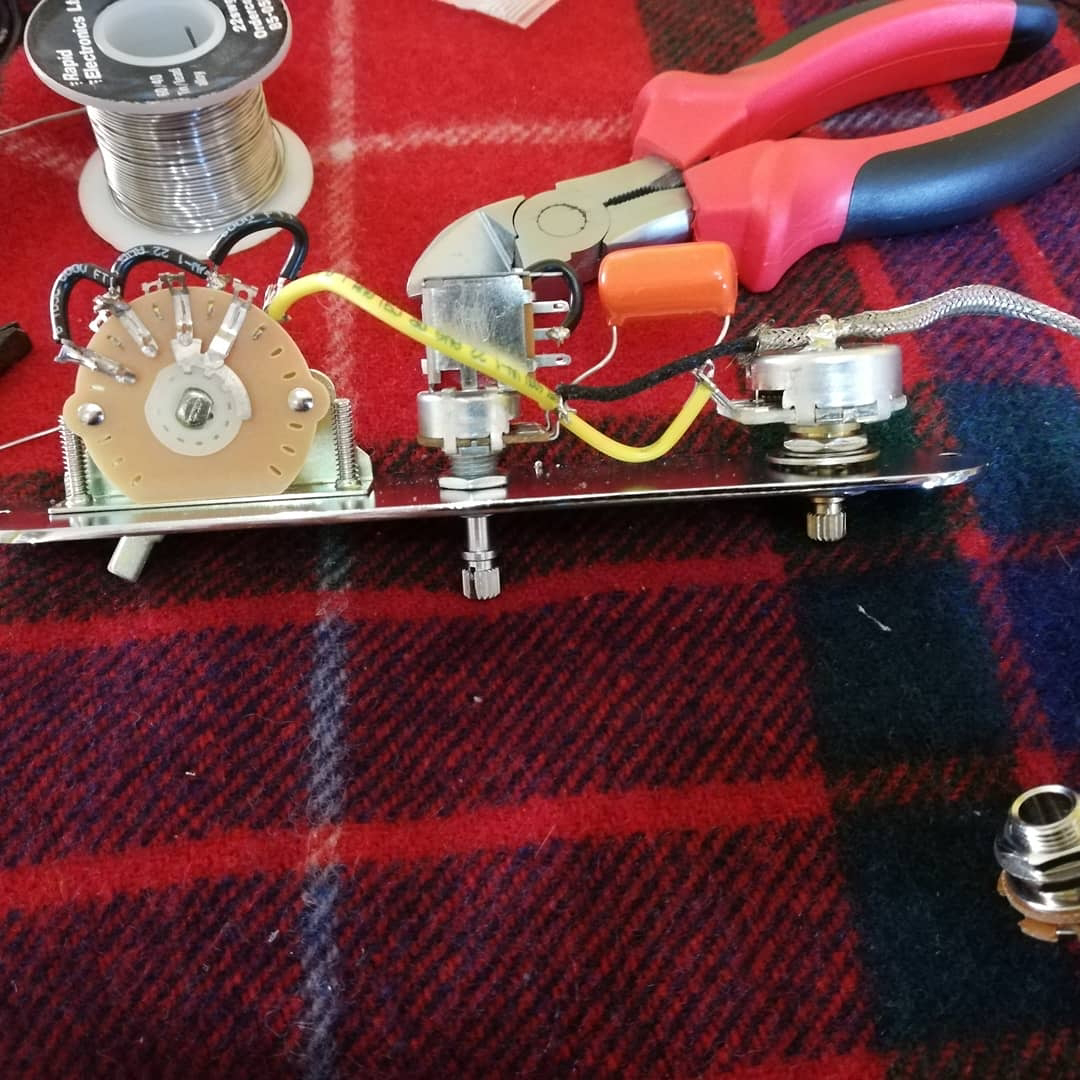 Keen eyed may think that switch looks funny.  I had it the wrong way round. Doh!  But spotted and fixed.  Btw I did check the output jack can get through from the control cavity.
You'll see a push push switch on the Vol control that's a coil spilt on the bridge humbucker.
Onto fret work. I levelled, crowned and polished up the frets.  I like the fret leveling beam with 240 and 320 grit paper on. Definitely much less in terms of getting the scratches out of the frets but it probably takes longer to level.  I'll take that though personally. After the 320grit levelling I used a series of finer grit fret rubbers then finished with a metal polish and more elbow grease but again pleased with the result. 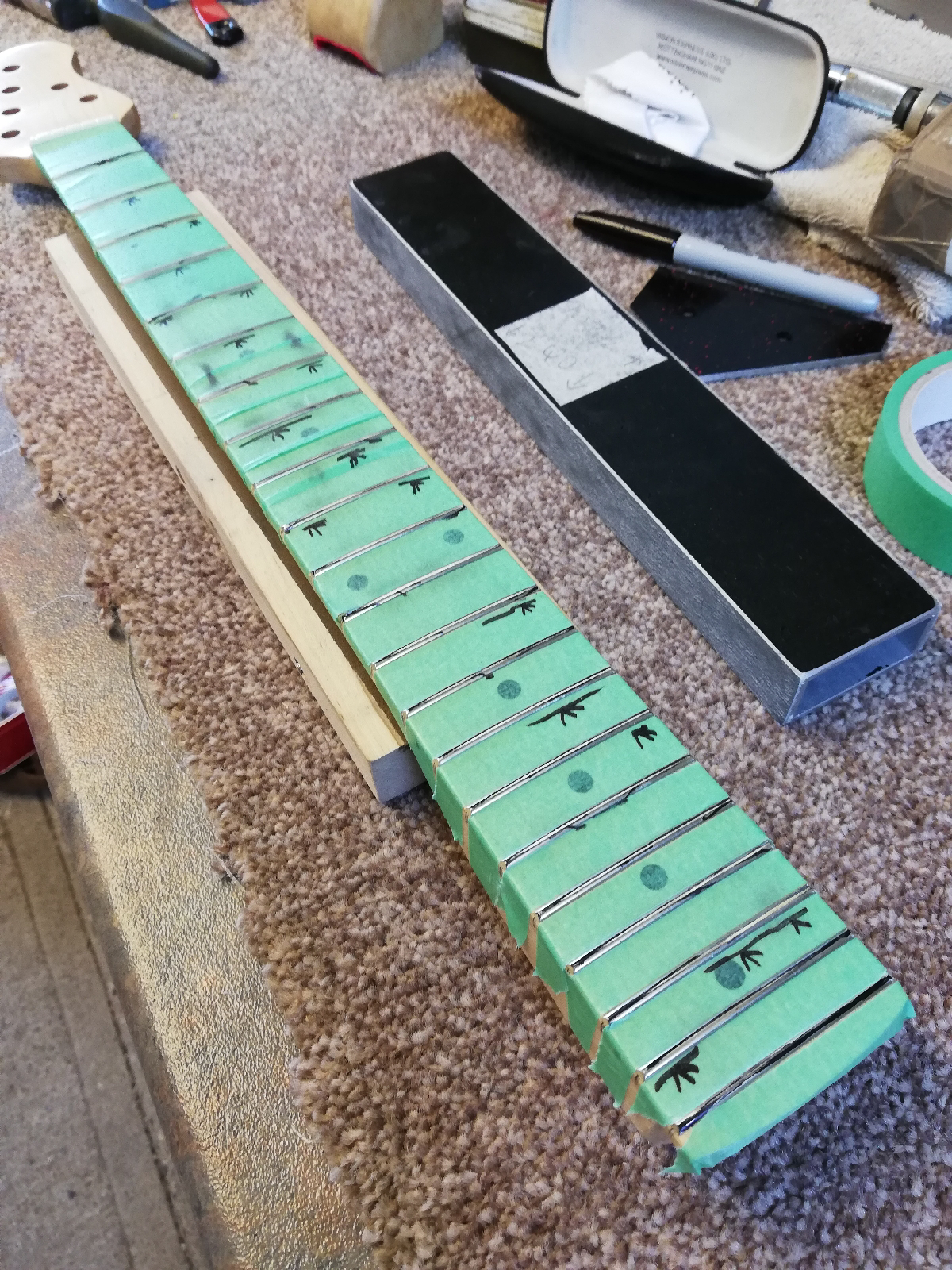 Levelling underway my crows feet marks show where I've found a high spot via the fret rocker.   Firstly that helps as I start to see where I expect to see more material being removed and also I can test as I go with the rocker on those areas. 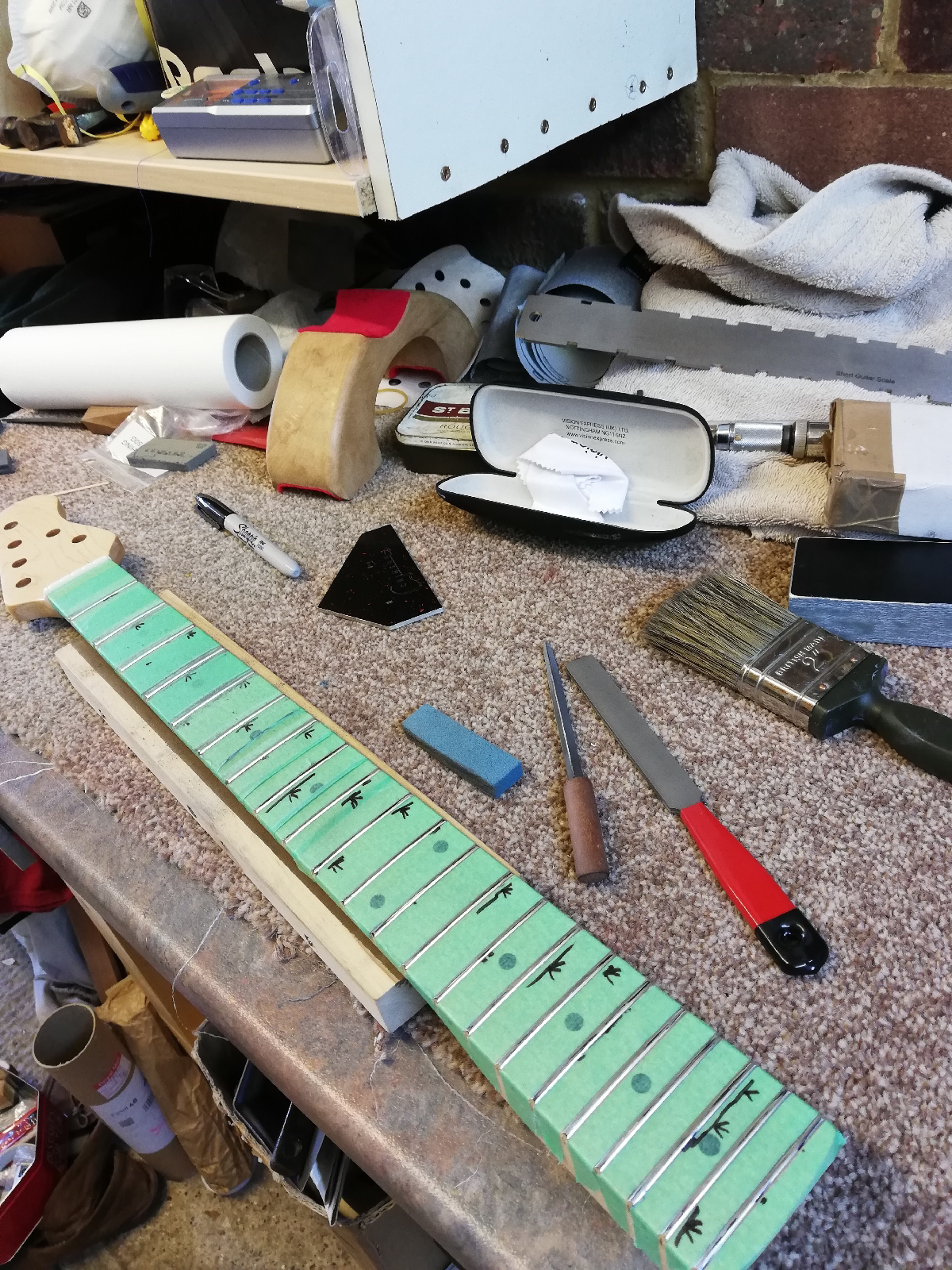 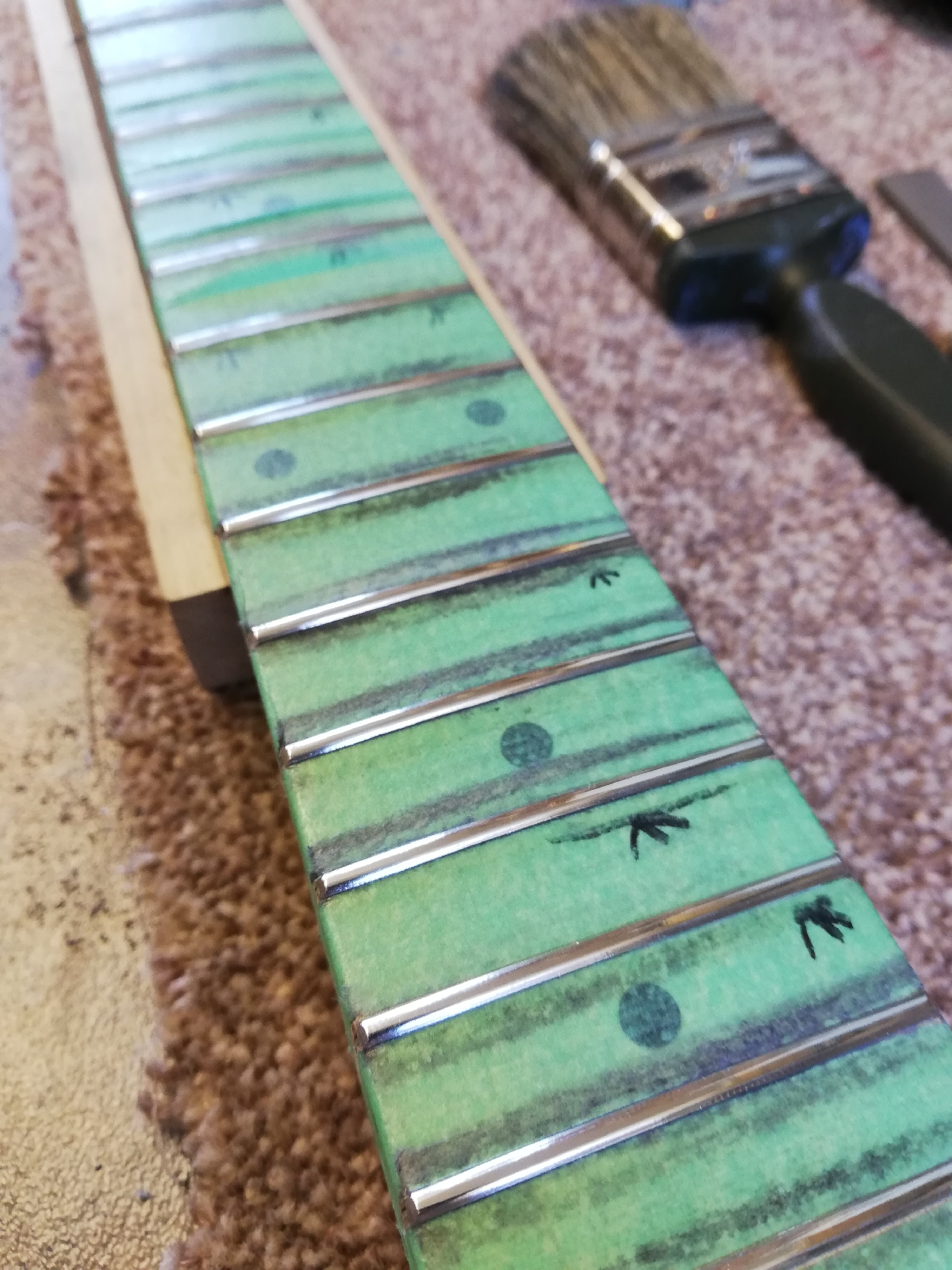 All polished up.
I need to sort out the scratchplate and essentially start final assembly.   That will be the next post.
Posted by Furtheron at 17:22 1 comment:

In the end I decided to change the neck joint.
So the body is similar to Fender Elite sweep and I smoothed the neck transition into that in an asymmetric curve to fit that sweep. 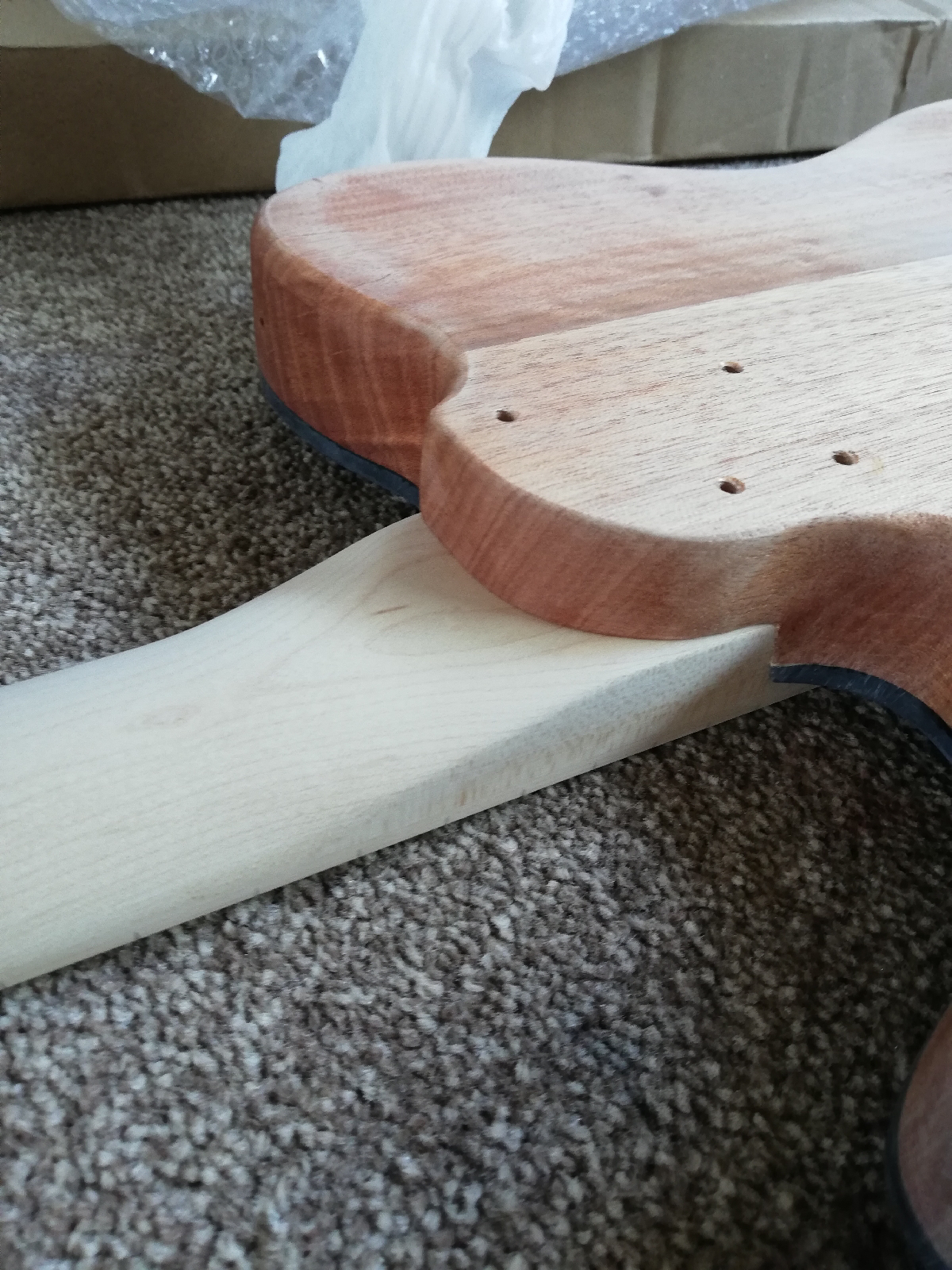 Then spent ages it seemed sanding it all and now I'm oiling it using Crimson Guitars Guitar Finishing Oil.  No stain I like the look of the brown mahogany as is so just oiling it a natural colour.
Once I got the drill I sorted out the ferrule holes, sorry I did not picture but I used the two outer string holes drilled through from front to live up a perspex template I got from Guitars & Wood in Portugal and used that to get a good straight line of holes.
Posted by Furtheron at 17:56 No comments:

Neck on!  Always one of the jobs that fills me with dread, if you screw this up... Well it's likely to remain bits of wood resembling a guitar rather than an actual playable guitar. Once attached I was able to line up the bridge and check I'd not screwed up the scale length etc.  All looks good for now. 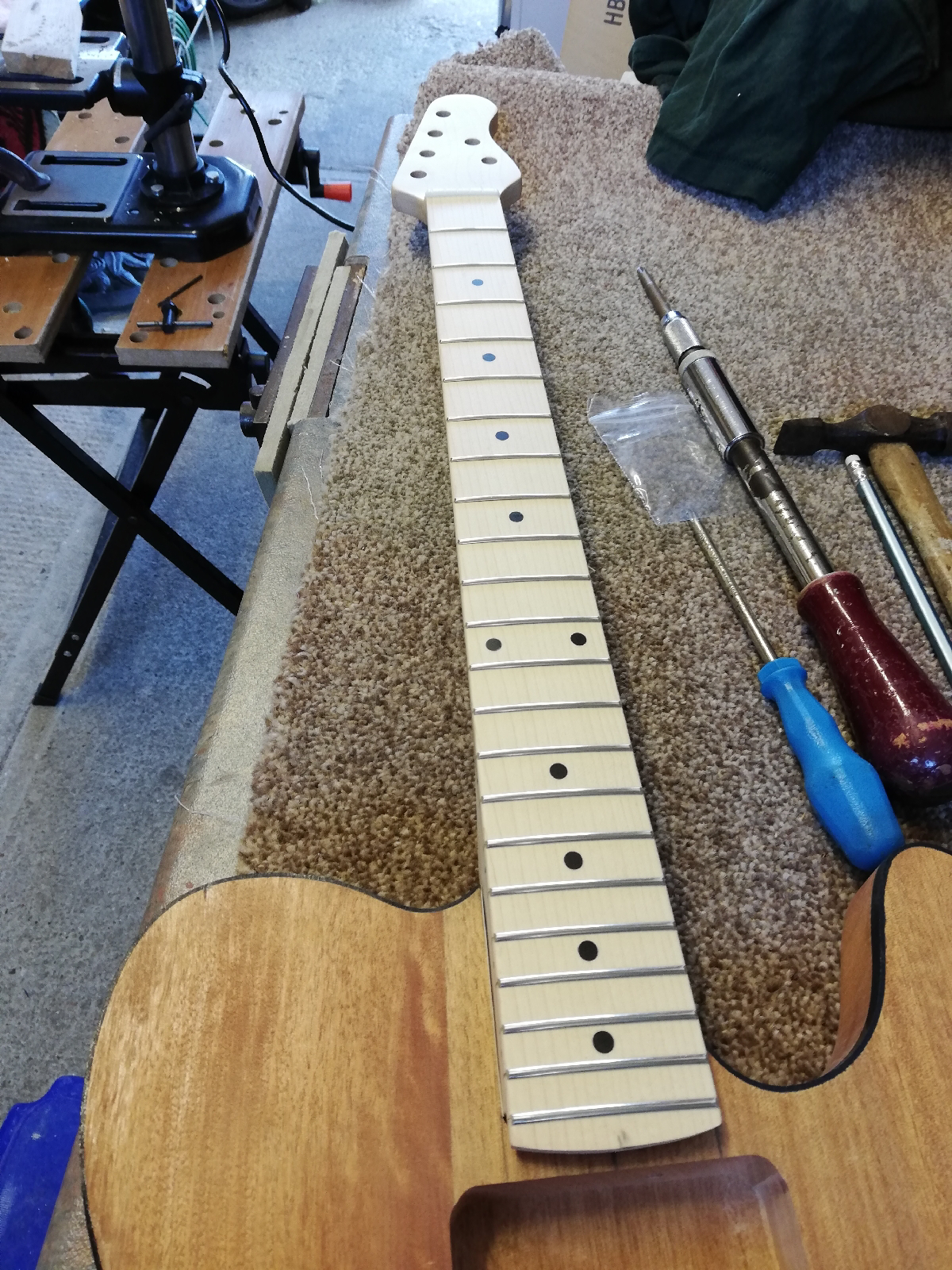 Now the Eagle eyed will have zeroed on the headstock.  One of the "unique" features on this build is that I've gone for a Musicman style 4+2 headstock.   I've never owned one myself but I like how it looks, how it allows straight string through the nut to the tuners (like Fender) but that it does away with the fiction friendly and stable tuning's nemesis the dreaded string trees.  So I thought I'd give it a go.  This limited choice of buying a neck. The neck I got is a Kimese product I ordered directly from China via ebay. It took ages to arrive as I ordered it just before the Chinese New year and then Covid-19 bit China. But after some weeks it duly arrived with my friendly postman at my front door. Stuff like that still impresses me more than it should do frankly.
So far I'm impressed with it. It feels nice and smooth the shape is a modern C feel unlike other replacement necks I have used which are a fair bit fatter than this. The fretting looks and feels good no noticeable sharp ends etc, again not always the case. Given it was under £25 including its intercontinental journey I really can't moan.   My only criticism is that the shaping at the body end starts a bit earlier than maybe necessary but maybe that's MM spec I remember seeing their guitars with a longer 5 bolt neck plate in the past. 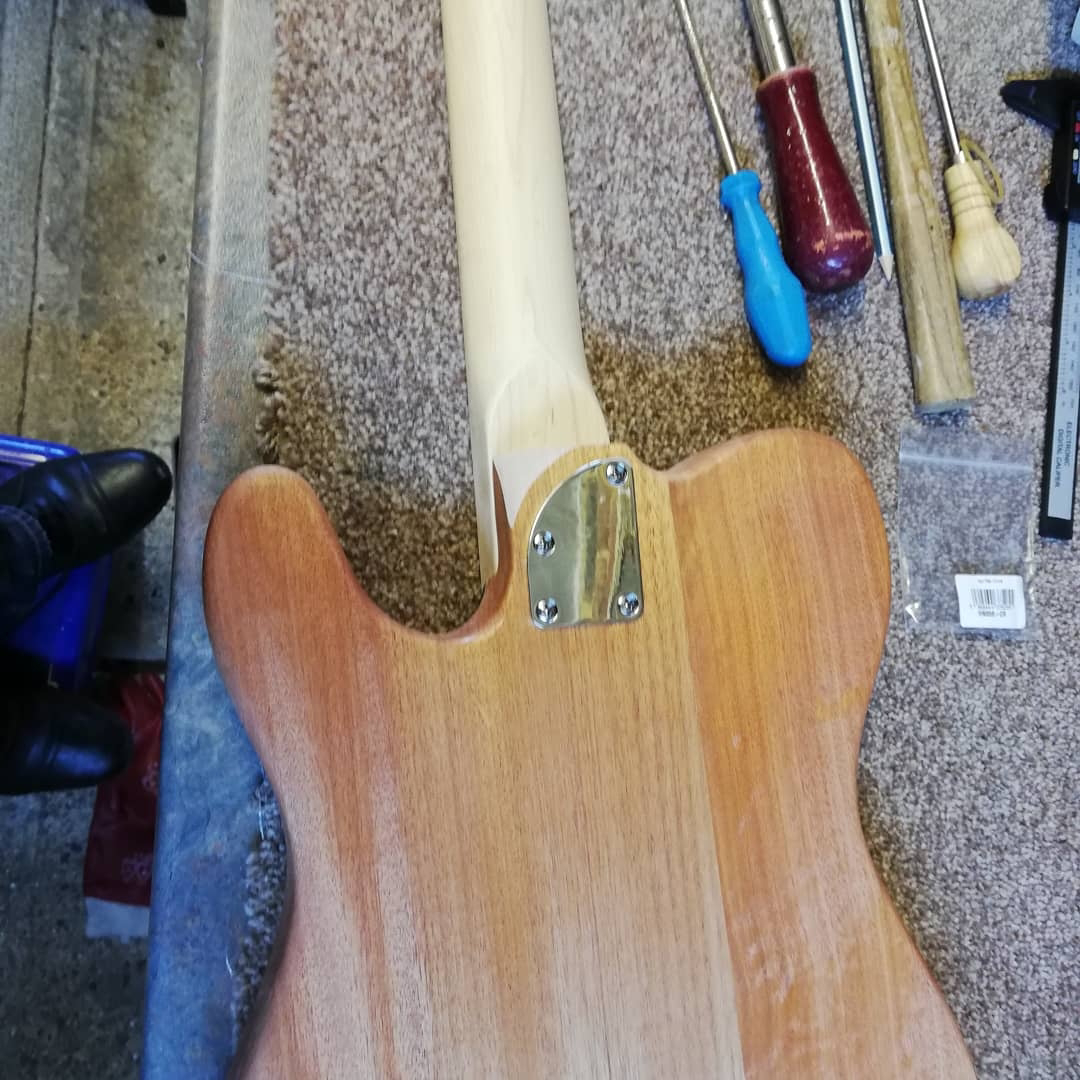 You'll see I've used a shaped neck plate to allow a shaping of the body where the dusty end of the neck starts. Initial feel is that's a success like on my blue thinline where I did the same. Surprisingly a very  little work here makes an enormous difference to feel.
For this build I bought "vintage" ferrules as they have a lip which hopefully will cover any tear out. The "modern" ones I used on the blue thinline are OK but a little tear out is visible.  However I didn't realise the vintage ones need an 8mm hole.  Guess what size brad drill bit I haven't got.... Thank goodness for Ebay and the Royal Mail in these lockdown days. Anyway a little hiatus as I'd rather get those holes drilled before I start finishing. 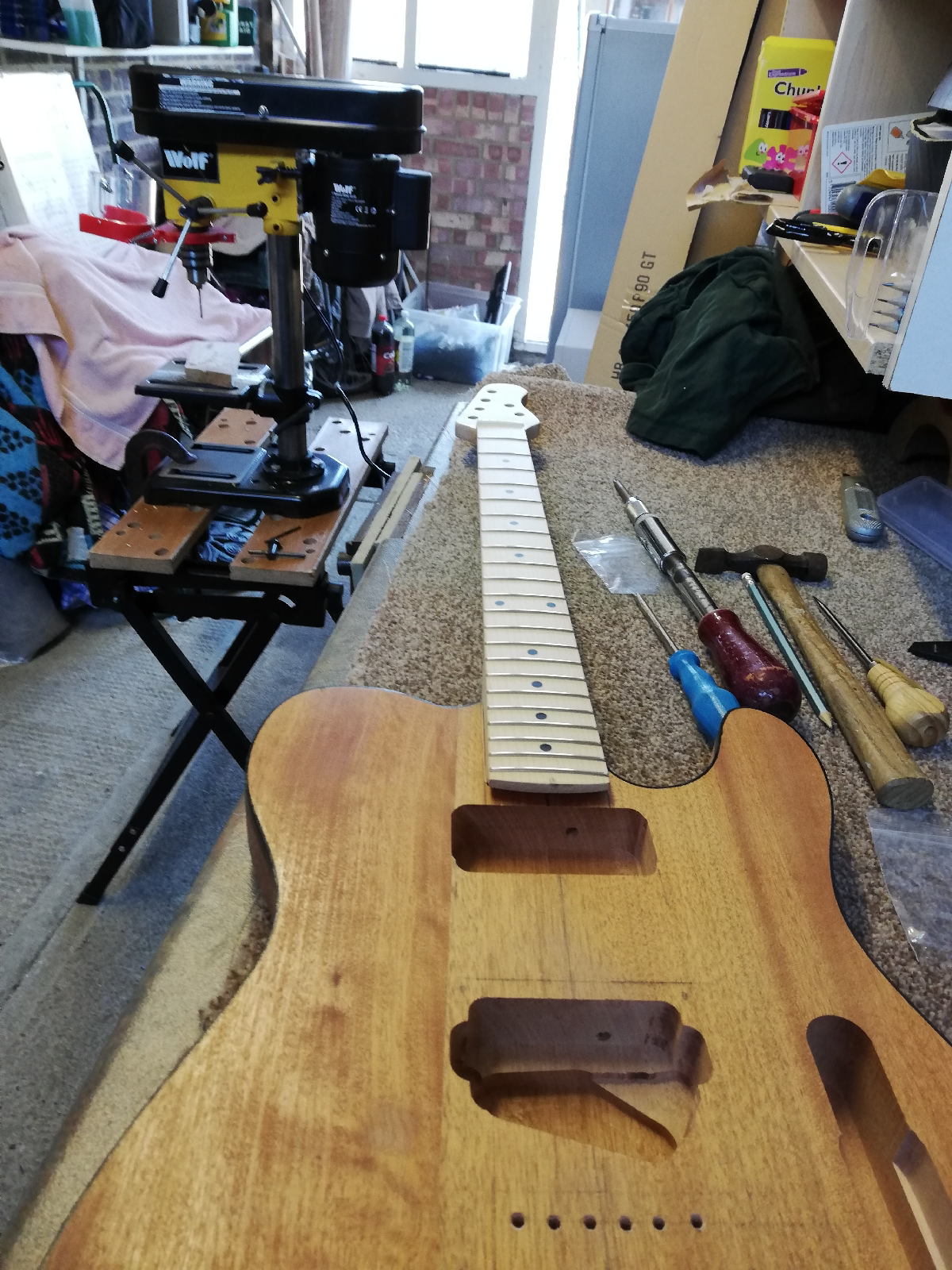 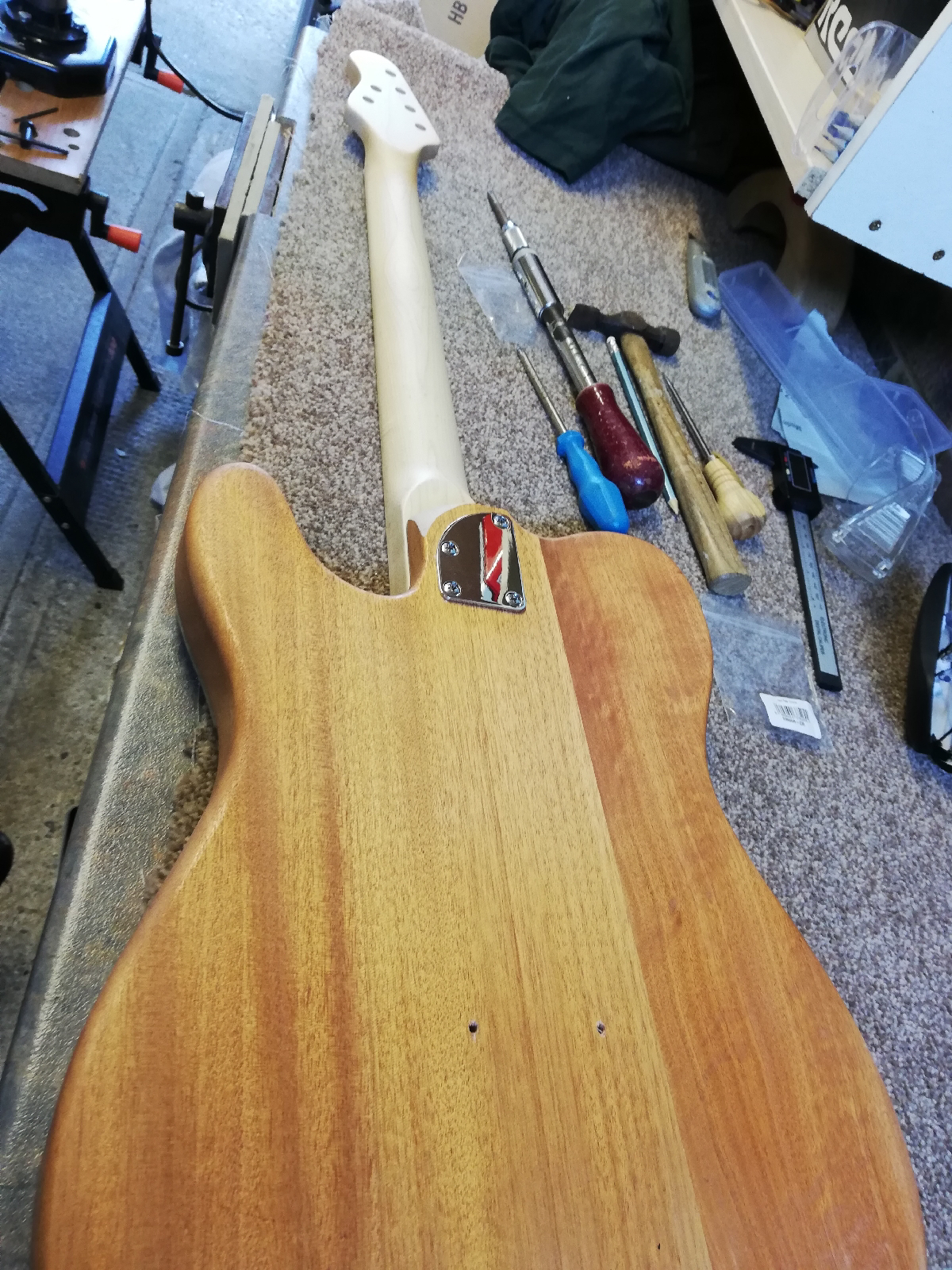 Posted by Furtheron at 13:05 No comments:

Whilst we're in lockdown I've started on a project that I've had been planning since the turn of the year.
I've settled on another T Style. Like the thinline I got the body from Gear4Music. They are great value and reasonable quality.  It arrived routed for a standard tele bridge pickup and a dual purpose neck route for a single coil or humbucker. However I decided to go for something very un t-type.  I'm going to put a P90 in the neck and a humbucker at the bridge.
So first thing was to route out for the humbucker.  I've got a t style bridge that incorporates a humbucker mounting ring.  So lining all that up led to a route at the front of the original route. 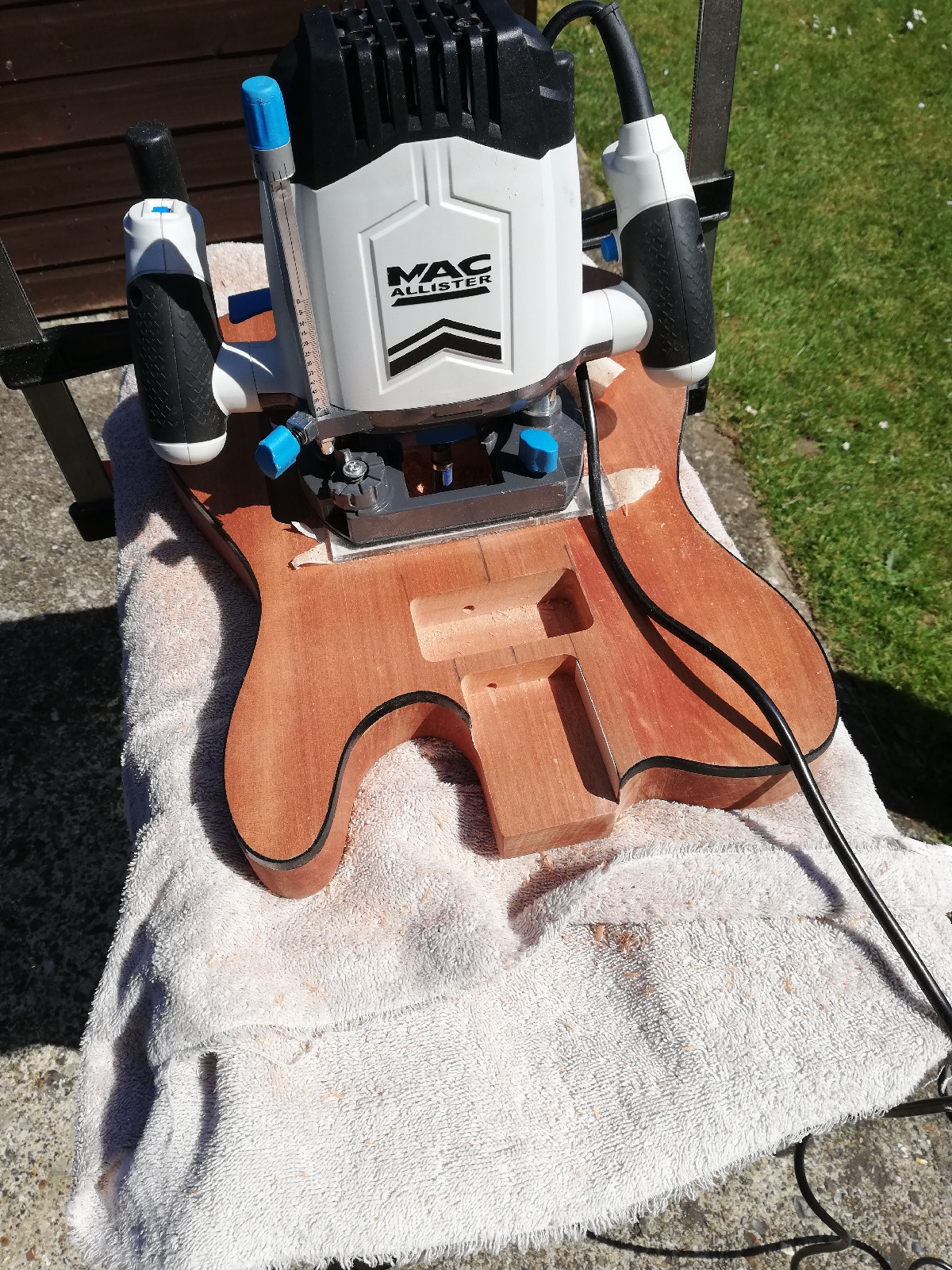 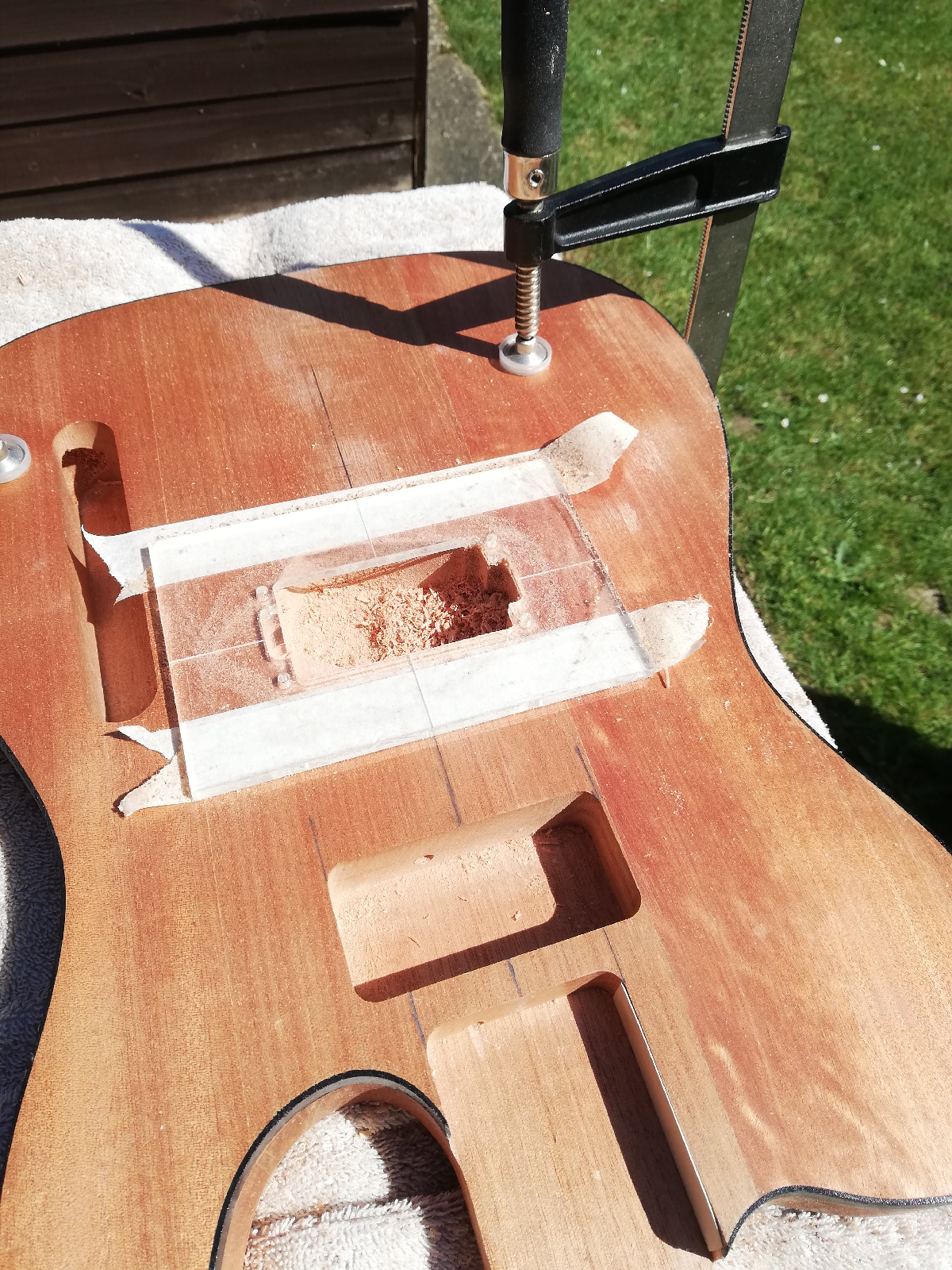 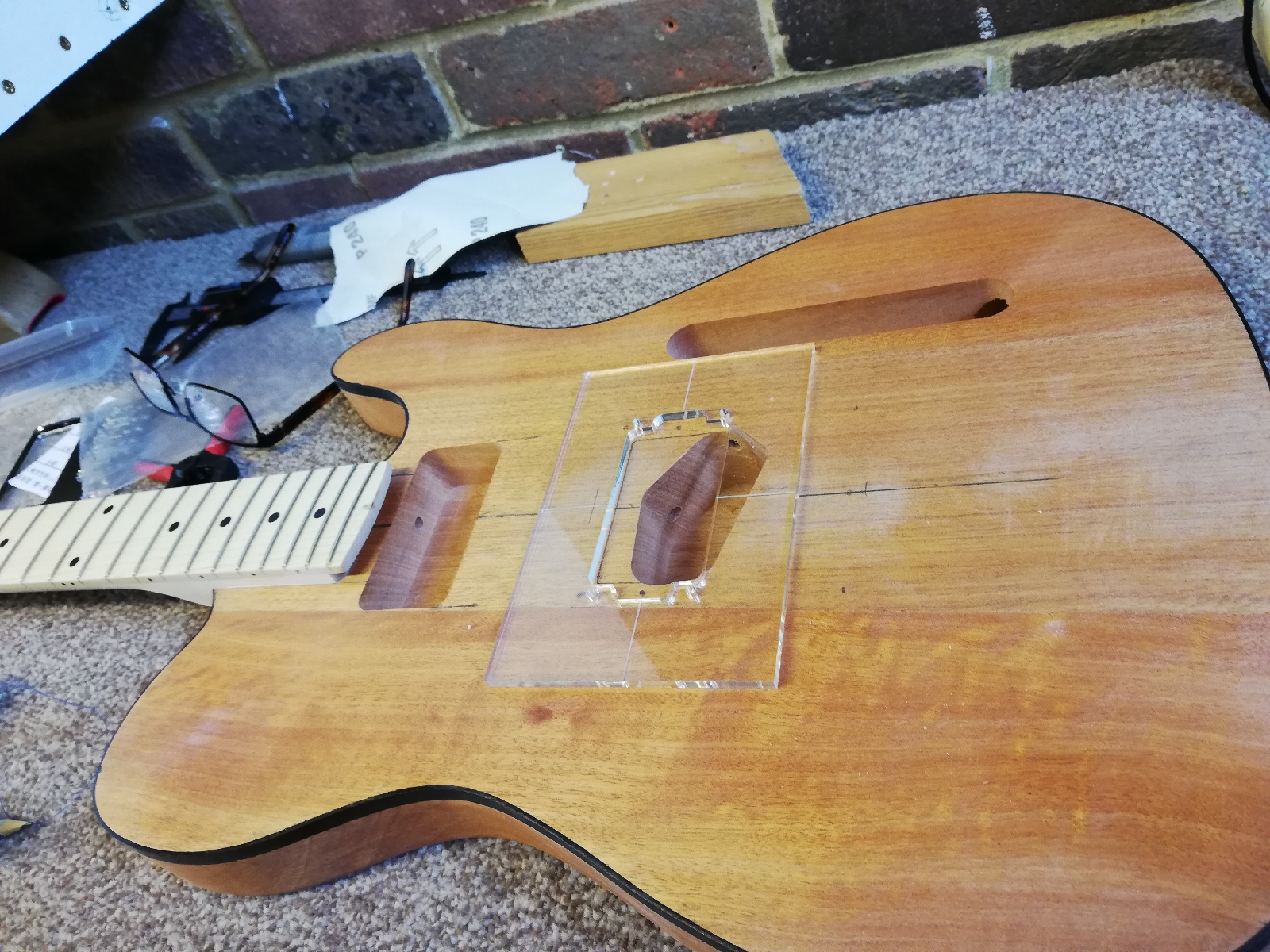 I had to very slightly enlarge the neck pickup route too to accommodate the P90.  Also the control cavity is a little too narrow to accommodate full size pots so again I've eased that out a little to make room.  The bridge is a string through so I used a home made template to guide through the body.
I'll give more details on exact hardware etc as the build develops. 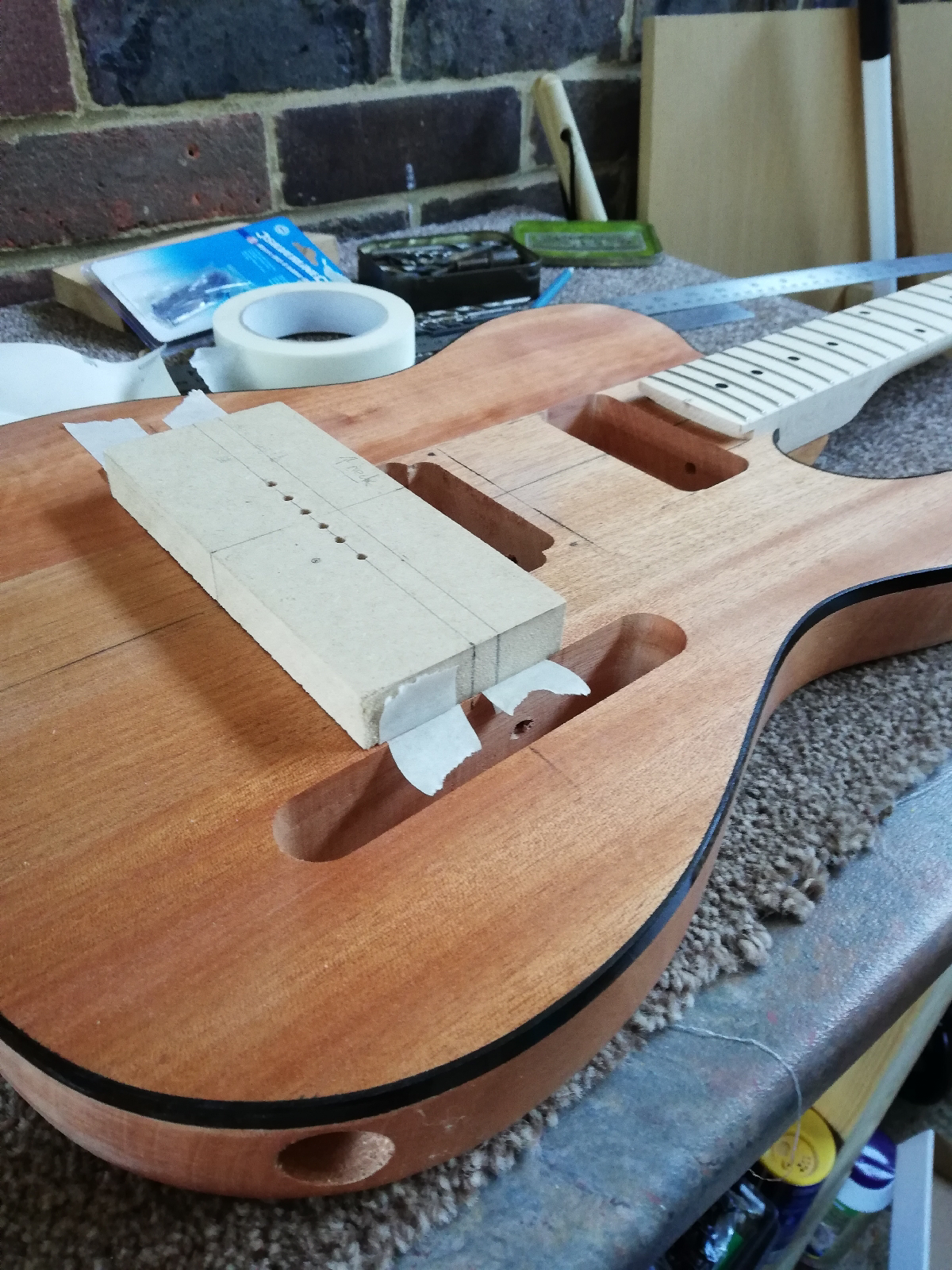 Posted by Furtheron at 14:52 No comments:

The Final part of my thinline t-type build