Showing posts from February, 2009
Show All

February 27, 2009
A job has come up in my current company based where I am but working for an American group - if that makes sense. It's not in my current department basically. Anyway it is a job that if it was with another company and I saw it I would definitely look at applying for it. So I've put in an application thinking that if I'd do that job for a company I know nothing about I might as well try to get the chance to do it for a company I know well. After the last postings ramble the bottomline is that I simply don't like this limbo state. I'd rather things moved on so that I know when I'm going etc. so that it will focus my mind and I can get away from the distractions of the current/past and onto the promise of the future. Hoping for a quiet weekend this weekend. Hopefully Mrs F will give the IT course she is on a rest as she is begining to do my head in with it and I don't think my coaching with all my bad habits is good. e.g. "How do you put a page brea
3 comments
Read more

What is and what shall never be…

February 26, 2009
I’m in a bad headspace place at the moment. I was reminded of something I read/heard of some time back last night. “When I am giving someone a piece of my mind I’ll never find any peace of mind” Very true. I was letting off about my current situation re the job and this was littered with loads of “They” and “Them” statements. I have to accept the situation, there is nowhere where it is written that the people who run my company have to treat me with any special difference to others. In fact my company is treating people very well in this process compared with many other companies. Also it is currently my choice to leave, I could do something about that if I don’t want to. Yes there are doubts back in my head as virtually daily the news is that our economy is nosediving into a worse and worse recession, surely if we see deflation in the next set of figures we’ll have to start calling it a depression. So maybe I would be better off with the devil I know get another year or two s
Post a Comment
Read more 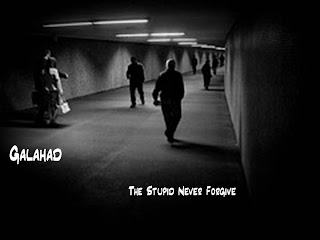 See the challenge set at Colin's blog With the exception of refreshing the picture page cos the first one was of two kids in a bath and I thought it just not appropriate the band name and album name aren't far off things I'd probably come up with myself... :-)
2 comments
Read more

February 24, 2009
Read this book! Right there sorted. Okay I’ll tell you more shall I? Stuart Shorter was a junkie, alcoholic, homeless guy who lived around Cambridge. His life had descended into the chaotic of the long term homeless, the violent and the abuser of substances. However he did start climbing back up the greasy pole and got a flat, got off the streets and tried to get a new life. Sadly just about the time when Stuart was getting it together he tragically was killed when hit by a train. Whether he was trying to kill himself as he had attempted numerous times before or if it was just an accident we’ll never know although some evidence is left for you to draw your own conclusions. This marvellous biography of Stuart is written by Alexander Masters who met Stuart when he was a voluntary worker at various homeless helping centres etc. in Cambridge. Pivotally they are brought together via a campaign to complain about the conviction of Ruth Wyner and John Brock who ran a homeless shelter
3 comments
Read more

February 23, 2009
Son-of-Futheron and I went to the Priest Feast at Wembley Arena on Saturday. Firstly, excellent value for money. The show started at 6:30 and finished 10:30. First up were Testament, who I have to be honest I know little about, remembering them a bit from the old days. Alex Skolnick having recently returned to the line up – they are back to pretty much the “classic” Testament line up and put out an album for the first time in some years. Basically Skolnick is a stunning guitarist but the mix on the night let him down with much of his shredding lost in a bass/drums heavy mix. Next up – Megadeth. This was a pretty typical Megadeth set played very fast. S-o-F remembered an interview where Dave Mustaine said he intended to fit 2 hours of material into a 1 hour set and Download and it did feel a little like that at times on Saturday. Latest guitarist through the ever revolving door that is side man to Dave M is Chris Broderick who was pretty impressive, although to be honest I th
6 comments
Read more

February 23, 2009
We are back from the Welsh trip. It was a nice break away and good to see Son-of-Furtheron again. We all piled into his student flat when we arrived and demanded cups of tea, the women were appalled at the state of the kitchen and went into cleaning frenzy mode. All very funny. We visited Bwlch Nant yr Arian which is a Welsh Forestry Commission site noted for it's Red Kite population and we got to see loads of these majestic birds close up. We also visited Aberaeron which has already become one out favourite places to visit... esp the tea shop and the Welsh Cakes! We got to meet and have a meal with Girlfriend-of-Son-of-Furtheron. Lovely girl who has clearly got the measure of our boy... "Oh it's just food, guitars and occasional geeky Physics with him." Spot on! All too soon we were on the journey back which given we were crossing the Dartford bridge at 8 o'clock in the evening I thought it'd be reasonable. Oh No - 7 miles of jams and nearly an hour
3 comments
Read more

February 17, 2009
Requiem is the last in the trilogy about Will Campbells life as a Kight Templar. This is Robyn Youngs first series of books as an author and she's gone straight into the best seller list with them all. As a book on its own it probably doesn't work as it dives into the story line where book 2 left off and a lot of references to previous events would leave you lost I think. So if you've not read these before start with Crusade then The Bretheren before reading Requiem. The book is very engaging making you want to follow the lives of the various main characters with our hero Will at the very center of the action. This book starts a little after the second book finished which was with the sacking of Acre in 1291 by the Mameluk army. The first book in the series was of Wills early life mostly in Europe as he joined the Temple and struggled to find his place in it. The second book was much more based in the Middle East with Will as a fully fledged knight within the Temple.
1 comment
Read more

February 17, 2009
I had my day in London yesterday I met up with my friend who works in a recruitment company, although we probably spent too much time talking about family, personal and mutual friends than focusing on the matter in hand... i.e. are there any bloody jobs about :-) Anyway she has mentioned me to one client who has talked about a job coming up that sounds plausible suitable for my experience and I've had another go at a CV rewrite for that. I met the outplacement guy who was very nice and outlined the options available to me, I need to book up on some of the courses etc. which might be useful for me. A friend pointed out a job local to me which again looked somewhat suitable, in fact a logical promotion opportunity from my current role so my hastily revamped CV is now in the internet ether for that as well as the closing date was end of this week and I'm off to Wales now to see Son-of-Furtheron for the next few days. Anyway the outplacement company's offices are right in the
1 comment
Read more

So long and thanks for all the fish

February 13, 2009
I was told today I've not got the one job I had applied for within the contracting department. I knew that was most likely to be the case, I'd been rejected on 3 other occasions in the past as well. Monday I'm off to meet the company who run our "outplacement" service to discuss my CV, experience etc. Wednesday we're off to Wales to see our son for a day or so and so he can come back with us for me and him to go to see the Priestfiest at Wembley with Judas Priest and Megadeth. Some good stuff that will hopefully relieve some of the pressures of the moment. Whilst I'd made the decision to move on once it is actually in your face suddenly your guts turn over.
6 comments
Read more

February 12, 2009
2009 has so far presented itself as already a year I’d rather not dwell on, given we’re only just half way through February that isn’t so good but that is currently the long and the short of it. As you know the beginning of the year was heralded with a sequence of tragic news, my Dad’s cousins passing (she was 94 and for that we should be grateful), a friend lost her brother very suddenly (same age approx as me), death of a young girl we knew (extremely sad), another friend’s tragedy with losing her sister and brother-in-law and her Mum injured in a house fire… and so it continued, and indeed continues to continue as another friend has lost his Dad in the last week only months after his Mum sadly passed away. All very sad. The news has generally been rubbish, the recession/downturn/depression (whatever it now is), the Gaza conflict, blah blah blah, only good thing was the American election being over and Obama making good on some of his promises early. However I’m not sure on his
5 comments
Read more

February 08, 2009
My attempt at my version of Gordon Giltraps On Camber Sands... ignore the mistakes please - I get terrible "red light nerves".
4 comments
Read more

That was a week that was...

February 06, 2009
This week is drawing to a close. God it seems likes months ago it was last weekend really so much has been happening. Firstly the snow happened Sunday night. Mrs F and D-o-F took ages to get home from swimming club and I had to skid the car onto the drive. So Monday morning get up and I decided to not even attempt to get to work. We had about 6inches by then. Schools were shut so we were all at home. Monday night I dug out the drive after another relentless afternoon of snow. Tuesday - we're on a slope and simply but I can see the road that is a bus route and gritted but there was no way I was attempting to back out off the drive and try to slide to the bottom of the hill avoiding all the other cars, lampposts etc. So another day at home, kids cheering and wife cheering as schools were confirmed shut a second day. (I might post more on that topic if I can be arsed at some other point). 10am my boss phoned me with a call I'd expected for a couple of weeks, I was told my "
8 comments
Read more

February 03, 2009
Small word. Lots and lots of consequences. Oh well - time for me to recreate myself as someone that others might want to employ and move on into a new chapter of life.
10 comments
Read more

February 01, 2009
Something of mine I wrote ages ago Enjoy
6 comments
Read more
More posts