Showing posts from August, 2010
Show All

Some photos from the studio 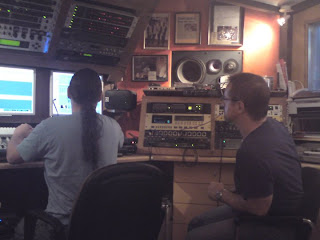 August 28, 2010
I spent 4 hours in the studio yesterday - you'll remember this was Mrs F's anniversary present to me :-) What a great time! Firstly huge thanks to Nick of Broadwood Music Productions for all his help. Broadwood studios is a little studio in a small "enterprise center" in a village just along the road from us. Actually I go to an AA meeting there pretty much every Wednesday. The studio is small but with a lot of stuff packed in to it and all I could possibly need for my needs. I'd gone prepared with several songs but, not surprisingly, we only got one done in the time we had - particularly given the arrangement/production I had in my head going in. We worked on Let Me Love You Tonight - which I've had a live version up on my Reverbnation player since I played it live at one of the RTYD Libertine gigs in Feb. Nick got me to play the song through and then started with Logic Pro on his Apple set up. I've never really used software like this for re
3 comments
Read more

August 27, 2010
Yesterday we all went shopping at a local shopping center. My daughter needed new shoes for school so Mrs F and her set off around the variety of shoe emporiums. What a nightmare - "I'm not having Clarks they are so unfashionable" my daughter complains. I can't see the point of that but also point out that Clarks last for years - well my brogues do anyhow. Mrs F "I'm not paying that - you need a mortgage" - however they last years... I'll shut up they aren't listening. So they go to another shop and agree on a pair but they only have the left one for a pair size 4 - where the hell is the other one? You'd think they'd remember only selling one! So son and I take the list for the curry that night to the Sainsbury. We finish and sit on a bench by the exit waiting for the girls. A lady - probably in her 70s comes along clinging to a trolley - clearly she had some difficulty walking. Now she has plenty more right to sit on the bench
4 comments
Read more 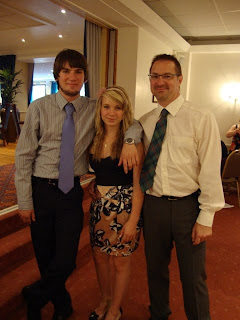 We're back!!! The wedding was a huge success - I managed to perform all the best man duties without a cock up :-) We had a few days in the Lakes - including a climb up Old Man Coniston... there is the most odd story of the holiday. So we have got to the top and were on the first part of the descent, Mrs F stopped to let a guy coming up past. He was my focal counsellor from rehab - so we had a brief catch up standing there up near the top of a mountain in the Lakes! How mad is that :-)
4 comments
Read more

Hi ho hi ho it's to the studio we go

August 12, 2010
My darling wife bought me an incredible present for our 25th anniversary. A slot in a local recording studio with an engineer on hand to guide me along! It is only half a day but hopefully enough to have a go at at least 2 songs if not more. When I opened my present, which we did a couple of days before the actual anniversary as we were going away as you'll recall, I was gobsmacked I have to say. It is just such a thoughtful brilliant gift for me. I'm planning a studio version of "Let me love you tonight" - see the player widget on the right for a live version of that. The intro I've always thought of as a bass solo and I think if we can get a drum pattern on that and an electric guitar with a phaser... oh and the bit at the end where there is the instrumental with the diff chord patterns... guitar solo! I've been working one up in the last couple of days. It's an odd one - it's some mode (never any good and the names) as the tonality of the
4 comments
Read more

August 12, 2010
Now this is funny I've decided to write this review a little prematurely as I've not yet finished the book. I probably will later today and add a post script to this review via the comments. Why am I writing this now then? Well in case the climax isn't a whizzbang ending I don't want that to detract from how I feel about this book already. It is brilliant! This is an amazing book about love, madness and obsession. It intertwines the lives of some French impressionists back in the 19th century with the lives of modern day Americans - namely an artist, his wife and his lover with the doctor helping him after he is arrested and sectioned after he attacks a painting in a gallery with a knife. Now the doctor, who is an amateur painter himself, wants to know why he attacked the painting, why he always paints the same woman over and over again, why his wife ended up finishing their marriage over the woman in the paintings (who may be fictional, maybe real, maybe dead) a
1 comment
Read more

August 10, 2010
My son has put some of his planet photos up on a website where you can buy them if you like them... Have a look at his planet collection .
3 comments
Read more

August 09, 2010
I've a new song for you to listen to... Look at the widget on the right hand side of the page - it's call Summertime - a short acoustic piece that has more than a nod towards Gordon Giltrap's influence. Alternatively go to my reverbnation site to listen via the player there. You can also sign up there to my mailing list :-)
Post a Comment
Read more

August 03, 2010
We had a family BBQ celebrating our 25th on Saturday - it was brilliant fun. We set up my PA in the garden and had various music blaring out throughout the day. The morning was very wet and it looked like it might be a flop but as people arrived about noon it stopped and I lit the BBQ and put out the garden chairs... in the end sun shone at times a very small shower wasn't enough to deter us and we had a great day. Sunday though was up early to head to the Sunday of the Sonisphere festival for see Iron Maiden! We got there about 9am and got parked up easily - great car park marshaling. Enough to get you in the right bit but not that officious "you need to move 2 inches or I'll punch you" type you sometimes get. We found a great tea stall - mug of tea, 2 rich teas and 2 chocolate digestives for £2! Bargain - nice tea too. We noted the camping looked less chaotic than when we camped last year and better spaced out, better shower block provision and better securi
3 comments
Read more

The bad old face of F1... the true art of saying sorry

August 03, 2010
Sadly Micheal Schumacher's return to F1 hasn't been great - to be fair it was obvious in the later part of last season that other teams were catching up with the new regulations and were getting ahead of Brawn (as it was then) which no doubt was one of Jenson Button's reasons for leaving - he is no fool and he clearly saw that to have a chance at retaining his championship he'd better be in a different car. However it isn't just that is it? Rosberg has pretty much looked the much more likely of the two Mercedes drivers to succeed this year. However the ugly side of Schumacher has not gone sadly - and last Sunday the incident with Rubens Barrichello was just that. Luckily he did judge it just right or in a split second thought better of it but I thank God Rubens didn't hit the wall at nearly 200mph that would have been a very very nasty crash. Schumacher won 7 world titles, has one of the greatest start to win ratios of any one - etc. etc. Sad that he has
Post a Comment
Read more
More posts