Showing posts from September, 2017
Show All

September 25, 2017
Or BCCIV as it is billed on the cover which features a fiery phoenix rising from the flames - very apt. A few years back it looked like that was it from BCC as they collapsed in a bunch of disgruntled tweets between band members.  Essentially Joe Bonamassa saw his solo career as his prime objective, Glenn Hughes saw it differently and when Joe declined to extensively tour the last BCC album that became an impasse.  Joe left, taking Derek Sherinan (keyboards) off into his solo band.  Glenn and drummer Jason Bonham briefly rekindled in a band called California Breed which Jason then similarly didn't tour the album off before that collapsed. We move on... Glenn gets inducted into the Hall of Fame as part of Deep Purple (he was in the post Ian Gillan Mark 3 version of the band.  He was also in the short lived non-Blackmoore Mark 4 lineup).  Joe calls him up to congratulate him, they make a dinner date and shortly they are talking about a new BCC album and at Glenn's writing mat
Post a Comment
Read more 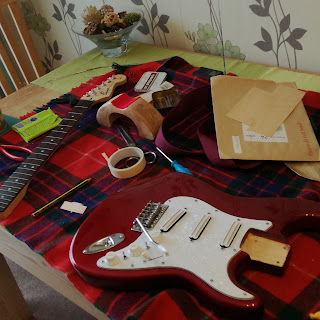 Long time no update... and I know hardly anyone reads this... I got around to some guitar work recently.  I bought a Fret Levelling Beam recently (more about that in a mo) and used that on two Telecaster kits I built a while ago where there were some fret issues, largely no doubt to me bodging it before with a shorter file.  The Levelling Beam did seem to make it a lot easier to get something considerably better. I also have been installing some shims on the necks of various guitars.  I know there is a lot said where people groan etc about them but if you've a bolt on neck it actually is one advantage that installing one is a non-destructive way to try and sort stuff out.  In particular, with my 12 string electric it helped me get a better action and massively improved overall intonation.  On one of the Telecasters it helped get a better angle over the brass bridge saddles. Finally on the Squier that I rebuilt sometime ago it helped set a better working angle on the bridge a
4 comments
Read more
More posts