Today we had confirmation that son-of-furtheron will graduate with a first class honours masters degree in Physics with space and planetary physics. Very big proud parent moment. All down to his consistent hard work and effort.   He so deserves this success.

Other good news I'm off to Silverstone with said son for the British Grand Prix weekend tomorrow morning which was my super 50th birthday present from the family.

The bad/sad news was attending my old colleagues funeral. Good to see so many people there and to meet up with old colleagues all scattered to the four winds now but sad it was that occasion to bring us all together. There was one face I didn't expect to see there, a colleague from my current job. He had also worked with the deceased some years ago. It is a small world and your time on it is short and unpredictable so make everyday count.

Email ThisBlogThis!Share to TwitterShare to FacebookShare to Pinterest
Labels: my music

So I've waxed lyrically about the album, gone nuts about the live show now I've read the book too.

Brilliant.  The book is an expansion of the story line that the album first brought out.  Essentially a fantasy novel set in an alternative Steampunk reality.  A young man Owen Hardy lives in Albion a beautiful and ordered country run by the Watchmaker who makes sure all runs to time, including the weather as his alchemists ensure that rain arrives on the very minute it is forecast.  However Owen dreams, he dreams of going to Crown City to see the Clockwork Angels perform under the orchestration of the Watchmaker, he dreams of far off lands like Atlantis and the legendary Seven Cities of Gold.

One night he is swept up by a helping hand and starts his epic adventures to visit these places.  He also finds he is a pawn in a dangerous power struggle between the Watchmaker and his Nemesis The Anarchist.

Written superbly by Kevin J Anderson with huge input from Neil Peart and Hugh Syme (illustrator) this is a story that draws you in and you ride the waves with Owen from this his hopes and loves, his losses and betrayals.

The ending is lovely and I can't help slightly give the ending away but it ends with Owen still hoping that he gains from at least one person love and respect that will then mean his life has been a success.  I can't help having a big amount of agreement with that really - who needs riches and power if those things are bought at the expense of love and respect.

Lovely book which I'd highly recommend even if you are no fan of Rush it stands up well on it's own as a work.

I'm glad I was reading it this week - I have had another addition to my crap 2013.  An old colleague sadly died suddenly - at the age of only 42.  Love and Respect.
Posted by Furtheron at 21:03 3 comments:

If I hadn't killed off my old blog in 2008 I'd be able to point to posts about us looking at universities for my son.  Well we're back on that trail folks with Daughter-of-Furtheron.

We went to look at one in Canterbury on Saturday - if she does go there likely that she'll stay at home, at least for the first year.  She really liked the details about one course that they do there, it mixed PE with Sports Science and allows you some options going forward, PE teacher is one route but they have people who've gone into professional football coaching etc. off that course.

The next few weeks we have ones lined up left right and centre!

She says she is too young to go off to uni but I remember my son looking a bit forlorn as we drove away from dropping him off at his uni the first time.  He soon cracked it and has had a great time since and done extremely well.  Oh yes we're off to his graduation soon, couple that with a three day trip to the British GP and it is a busy few weeks ahead in the Furtheron household.
Posted by Furtheron at 12:06 3 comments:

I was going to paint the back of the house on Saturday but it was so windy and with an Oak tree next door dropping leaves and catkins everywhere I decided that would be a bad idea.  So home alone as everyone else was out I heard a thud through the letter box.  My new Wilkinson bridge for my Tele had arrived.  I toyed with putting one of these on when I built it and saw one for only £17 so thought I'd have a go.  Here it is completed.  Any difference?  Well maybe a slightly more springy sound and little more sustain due to the brass saddles - maybe...   Whatever I like the look and the ingenious compensated brass barrels make the intonation as near spot on as you can get without the strat like bridge pieces versions.

Not to blow my own trumpet and I could never have done this is someone had been in the room but I "eyed" in the saddles with reference to the six piece unit I'd removed.  String up and tune up and then check the intonation... honestly spot on on the four outer strings and only had to adjust the G & D one by a millimetre or so.  I felt like a genius!  Like I said if I'd tried that to impress someone witnessing it it would have failed big style! 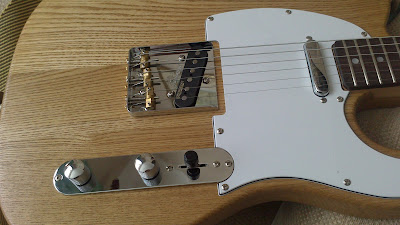 Then to my "Nunostrat", this build started in 1981 with my Dad and I when I was still at school.  About 10 years ago I revamped the electrics with new Swineshead pickups (sadly no longer available), they have wooden bobbins that closely match the stain on the ash body.  There are coil taps on the tone controls on both pickups, I went with the tone control to be different from most commercial makers but to me more sensible, you switch the coil tap and adjust the tone more than the vol - well I do when I play coil taps anyway.

I thought I'd give it a fret dress, here it is being worked on. 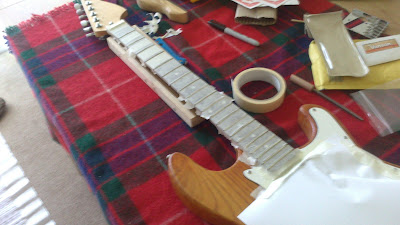 And then afterwards basking in the sun. 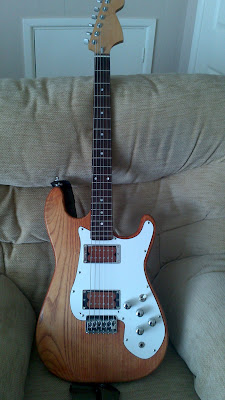 I have completed the new Dan Brown  novel Inferno. Conclusion?  Note to self "Don't read any more Dan Brown novels!"  However no doubt I will ignore that note when the publicity machine kicks in.
Overall summary? Well at least I can read his books unlike Hillary Mantel. The usual stuff with Robert Langdon using his symbolic sleuthing skills to save the planet from an evil plot. There are twists a plenty with most people not who you first think they are, a typical Brown plot trait, but actually just a little over done for me in this one frankly. It is ok but nothing that special really.

However the thing that really does annoy me with his books is the statement at the front that says "All scientific and historical references in this novel are real". They aren't. I'll give you one example that lept off the page and really annoyed me.  Dan references Eugenics on page 294.  His statement there is just plain wrong. He states that "In the 1940's, Nazi  scientists had dabbled in a technology they dubbed eugenics"   Actually eugenics comes from Britain and was named by its founder Francis Galton in 1883.  It isn't a technology either, it is a philosophy.  One simple sentence about a "historical reality" that is wrong in two major points, I won't deny that the Nazi's did abuse Eugenics and thus killed off that movement/philosophy successfully!

You can find out about the history of Eugenics on Wikipedia. Just why claim this bogus authority at the front of the book and then make a statement like that, which anyone can see is wrong in two major facets?  Sorry Dan you annoy me.  If you never had that statement at the front of your books, whilst your sales of the DaVinchi Code would never have been so high, I'd have respected your integrity as a writer of fictional novels.  Also, if that simple fact is wrong then I have question all the rest too which sours my relationship with Mr Brown and his clever plots.

Oh the ending is really lame in my opinion too.

I'm now reading Clockwork Angels - the book inspired by the Rush Concept album from last year of the same name.  Now given this is set in a steampunk fantasy world I'm not expecting to be annoyed by any references I may feel are false... it is fiction after all and that is ok... ;-)
Posted by Furtheron at 07:19 6 comments:

The Peonies in our front garden have bloomed apparently indicating summer has arrived at last.  They have had large tight buds for the last couple of weeks straining to burst open but the cold have kept most of them shut.  A couple did come out early only to be battered by a rainstorm.  I think they are so colourful and lovely flowers - I'm not much of a flower person but the peonies have a place in my heart as their blooms are so beautiful but so fragile too, a rain shower or too strong wind and they are gone beaten to sodden pedals spread on the floor.  Too often they bloom for such a short time as our fickle British weather changes so quickly that they get destroyed quickly.  Hopefully with a sunny week forecast they may get a longer innings this year.

Here are a couple of pictures of them 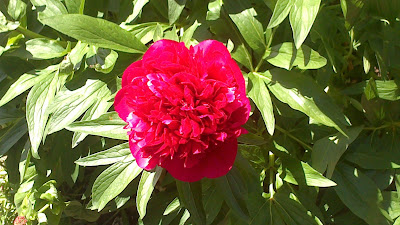 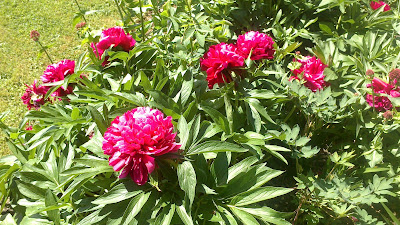 Have you ever worked somewhere where the culture is long hours and "presenteeism"?  If so you may well have heard the oft said jibe, "Part-timer", at a colleague leaving either early or more likely just simply after they have worked their hours for the day.

Well for me now this is actually the true case and not a jibe.  As of today I'm 0.4FTE - to use the official term at my employer.  I only work for them now for two days a week.  This is all in planning for the course I'm starting in September.  I'm firstly going to do some jobs about the house i.e. paint the back of it, put a new roof on the old kids wendy house etc.  In Sept I start the course and I also therefore want to look potentially for some voluntary work where I may be able to exploit the skills I hope to be gaining, accepting of course that I can't do proper 1 on 1 clinical work or anything like that for a long time.  So from now on I'll only be in the office Tuesday and Wednesdays most weeks, occasionally I might move that about, especially early on as things got booked that I'm needed at before people knew my new work pattern.  Part of me is all excited about the change and happy to not be on the daily grind of the commute 5 days a week.  Another part of me is all worried about money and whether I'll be any good at the course and whether anyone will offer me any work in the new career etc.  Although all told I'm remarkably relaxed about it all considering.

This weekend we're off to a relative of my wife's wedding do.  Then tomorrow I'm at a AA convention all day.  Glad that the better weather has finally arrived even if it still doesn't really seem warm enough etc. for June.
Posted by Furtheron at 14:26 6 comments: