I got this idea from Chris at Highline guitars from a video he put up recently on his YouTube channel.

If you haven't much space available and certainly not enough for a permanent workbench here's a way to get one you can store away. Underneath is a Black & Decker Workmate that I've had for years and which already folds away.  The top is a large offcut sheet of chipboard that was in my garage - a left over for a kitchen installation years ago. 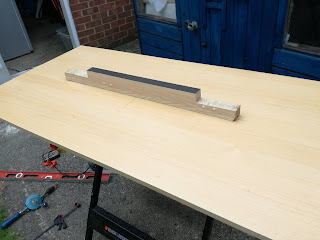 Underneath you see again a chunk of chipboard that was in my pile of "it may come in handy one day" offcuts.   You'll see I notched it at the ends so sit snugly on the workmate.  Once this clamped in the top is held really tight and it gives you a much bigger smooth flat surface to work on.  I heavily countersunk the 2.5" chipboard screws so that they won't scratch anything I put on there.

The final little touch again from Chris at Highline was the portable carpenter's vice.  I honestly had never seen one before until I watched his video.  The unique feature being the clamp underneath allowing you to clamp it to a suitable work surface.  I thought that would be really useful so looked around for one to find they aren't that common at all.  This is a Record Model 51.  I had been looking on eBay for one at first thinking about £10 - £15 would be reasonable.  But no nearer £20 - £25 was what most were asking.  I tried to make offers when a couple didn't sell on the first listing to no avail.  Then this one came up as a proper auction and was supporting a hospice.  So I stuffed in my top bid - essentially around the others that I'd seen.  I actually got it for a few quid less.  I've fitted it with new jaw guides made from some Sundela pin board which is nice and soft. 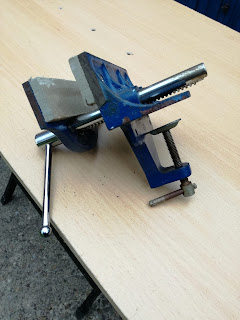 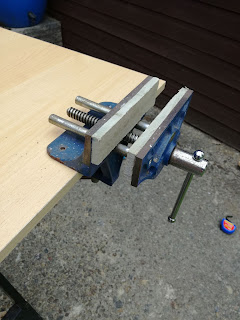 So there you have it a good size smooth workbench with a handy vice and cost me less than £25 and can be stored away in the shed/garage when not needed.