Gibson made this announcement a few days back... 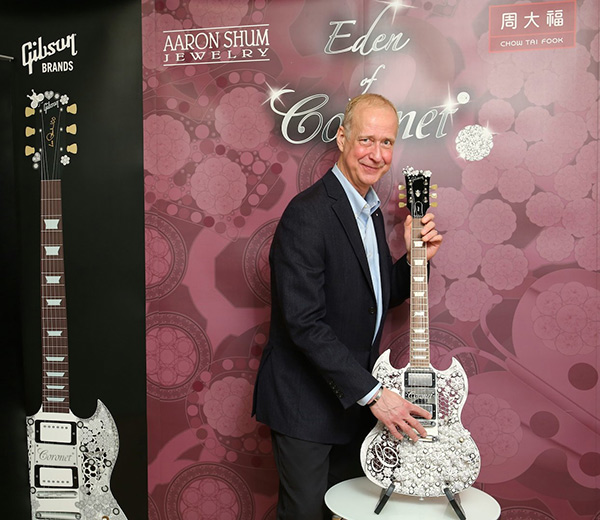 So here's a game what would you buy instead?

Me... hmmm....    Probably some silly PRS Private Stock 513 to start.   An old Strat, early 60s rosewood board, an ES-175 with PAFs, 335?... more likely knowing me a 355 again early 60s preferably or a good modern one....   A Les Paul - a real late 50s?  Don't know possibly one or more from the great current custom range a "Gabby" or a "Dutchburst" of the ones I've seen recently....    Maybe that original prototype Custom that sold for $300K recently - that was one of Les's own guitars and whilst not what was claimed a really important piece of history.  Or could I get hold of Rory Gallagher's beaten to death Strat?  I doubt his brother would sell it but I'd rather spend $2,000,000 on that, rust, worn wood etc. than the jewel encrusted bauble above.

Recently British guitar maker Gordon Smith was up for sale as I recently talked about.  If I did have $2,000,000 in the bank (they're still laughing btw) I'd have invested in that as a going concern.

Part of me feels if you want a guitar buy a guitar. If you want diamonds - buy diamonds... just saying...
Posted by Furtheron at 10:14 6 comments:

Book Review - Quarter Past Two On a Wednesday Afternoon

I got this after hearing it reviewed on Radio 2 last year sometime. It is Linda Newbery's first novel for adults although she is an established children's story writer.

The story is mostly set in the present time and focused on Anna a young woman who when a teenager her elder sister, Rose, disappeared at a Quarter Past Two on a Wednesday Afternoon.  The narrative then flips back and forth to times before Rose's disappearance and just afterwards as well as further back as part of the story involves her mother and her loss of her brother (Anna's uncle) when he was a teenager in a drowning accident.

The book deals with loss, sibling rivalry, love, deception, etc.  It is a complicated weaving of various components which I found intriguing.  Not a rip roaring fast paced page turner, more a sitting back middle of the afternoon with a cup of tea and a bun type book.  Maybe more geared to female readers than male but I still enjoyed it.  In fact I did get quite engrossed and engaged in the lives of the characters to the point where close to the end of the book there was a setting where I feared something awful might happen that I actually stopped reading the book at that point thinking I needed to gird my emotional loins so that I could stomach that act if it did happen and picked the book up later in the day when I felt ready to face it.   Also there is a really great reveal at one point in the novel that left me stunned - never saw it coming and I was left as bewildered as the narrator at that point by that.  That part was very well done indeed.

So overall a recommendation.  I'd give it between one and two thumbs up on the  FTUBRS*

Email ThisBlogThis!Share to TwitterShare to FacebookShare to Pinterest
Labels: Book Review, Linda Newbery, Quarter Past Two On a Wednesday Afternoon

No not my bright red Graduate 60 that has graced the top of this blog for a long time now but the company!

Yes in one of the fan facebook sites someone put up a link to the fact that John and Linda Smith are looking for a buyer after 40 years in the business.

I'm half tempted.  I wonder how much they want?  Is this madness?  For me to take it on...  They state that the business would need to relocate anyway so the fact they are in Manchester and I'm in Kent seems little concern - a hand over period then a relocate to Kent.

USP?...   One thing is the Carvin like ability to order a custom build for you off a menu selection in effect. Given you a one-off unique guitar but at less than USA off the shelf costs.

So... now I'm wondering if other Gordon Smith users would join a Kickstarter campaign to ensure the company continues and is in "good hands"...

Anyone remember those old Victor Kiam ads for Remington razors?  He was so impressed he bought the company... am I too?

UPDATE 11th March - Chris Smith has said on Facebook that Auden Guitars are interested in taking over!
Posted by Furtheron at 10:07 4 comments:

BBC's adaptation of A Casual Vacancy

When I saw that the BBC had taken the decision to dramatise J.K. Rowling's A Casual Vacancy I was looking forward to it.  I read this book about a year ago and was impressed by it.  The number of characters weaved into the story line and also that the storyline was hard hitting.  Almost really a modern day take on Dickens exposing injustice in society and dealing with greed, lust, power etc.

Sadly the BBC's adaptation was a let down.  Not because the setting failed - they nailed Pagford well.  Or that the cast and acting wasn't top notch - a quality cast saw to that.  However for some reason someone somewhere decided it should be just three one hour episodes only.  This then led to a massive re-write by Sarah Phelps.  I think she presented a good coherent story... it's just that it wasn't really A Casual Vacancy as in the book.  (I'll return to this below.)

Here's an observation.  It is replaced by an updated version of Poldark (which has been adapted before).  That runs for 8 episodes.  The excellent new Banished which is a drama about Australian convicts set in the 18th Century started on Thursday, that is 7 episodes.   And the swashbuckling The Musketeers is nearing its second series 10 episode run.  So if you are adapting or writing a historical drama for the BBC you get a long run, a modern hard hitting challenging one only a short one seems to be the conclusion I can draw on these facts.  I think if this had been an adaptation of a Dickens novel it would have been longer.  Seriously this needed to be another 2 episodes at least and then some major story elements could have been retained.

If you don't want to know and want to read the book leave now...

Firstly - Barry who dies in the book early on had formed a rowing club for the girls at the local comprehensive.  Krystal was on that team - that is important - very.  This was showing the girls that despite the problems in their lives if they worked hard and worked together they could take on the Mollisons of the world and beat them.  They had beaten the team from the private school.  Hence her devotion to Barry but not because he replaced broken doors or picked her Mum up from the police station.

Gaia and her Mum moved to Pagford because her Mum was in love with Gavin - Barry's friend.  He disappeared completely out of the rewrite.  Again an important piece not least because of his affection towards Barry's widow is important and the tension of them moving from London not least for Gaia is an important plot point.

Colin Wall's source of his paranoia was never explained - it is another important sub-plot.  How do you feel about someone with concerns about their feelings towards children who is working with them?

Samantha Mollison - well played by Keeley Hawes but sadly all the point about wanting to recapture youth and her infatuation with a boy band was lost - again to me important to understand her character etc.  Oh yes... where did the Mollison's lesbian daughter disappear to?

Finally the talk before this was aired was that the ending wasn't watered down.  Simply, it was.  Krystal still died but in the book there was the violent rape by the Mum's dealer boyfriend, Robbie's death by accidental drowning and then Krystal taking her own life by overdose of her Mum's heroin supply and you as the reader/observer being whipped along in this maelstrom of unfair injustice that you fully understood why Krystal gave up.  And that should make the reader then ask - "Is this society I live in just and fair and right?"  That's the point of the book.  The show ends with a sad accidental drowning but without as much punch in the solar plexus of your conscience.

To me it seemed like bits were continually shaved off the story to be able to fit it into the length rather than a suitable length being considered for the material.  Shame....
Posted by Furtheron at 09:24 No comments:

Book Review - The Girl on the Train by Paula Hawkins

The Girl on the Train by Paula Hawkins

What a terrific read!  A stunning first novel from Paula Hawkins.  Written as though sort of diary entries from a series of women mostly our heroine Rachel it describes the events before, during and after the disappearance of a young wife one Saturday night.  Rachel is the central character who used to live in the same street as the woman who disappeared and has come to "know" her through seeing her from the train every morning as she passes by on her way to London.  When the woman disappears Rachel becomes embroiled in trying to identify the person who has abducted her.  A really good page turning thriller that introduces the characters and events via some time hopping and perspective changes and continues in the early part to make you continually want to find out what fills in the full picture.

I'd totally recommend this book.  It is very close to my top accolade on the FTUBRS* (i.e. with a grin) and only just misses out as just towards the end I'd pretty much figured out the reveal of the killer.  If that had been a surprise it would certainly have got it.   It also gets a huge recommendation from me as poor Rachel is divorced, jobless and unable to tell her flatmate she has lost her job so commutes to London still each day to look normal.  Rachel is also an alcoholic (not something I knew before selecting to read the book I saw it had some good recommendations and was compared to Gone Girl so decided to try it).  This is in my humble opinion the best characterisation of an alcoholic I've ever read other than when billed as a self-penned memoir.  It so brilliantly describes the battle, the fear the blackouts etc.  Superbly researched and written.  So, only because of the ending, a clear and huge Two Thumbs up on the FTUBRS* - actually with half a grin... (my scale my rules... I can break them).  If you have an Easter break planned and want some reading material - pick this up as you leave you'll not be disappointed.

I also recently read John le Carre's Our Kind of Traitor.  OK not one of his best, but an interesting yarn with some good characterisation but the ending was a little flat.  It seemed to end all to suddenly and with something that was a bit predictable a bit before hand.  It centres on an academic and his girlfriend who go on a tennis break at a resort in the Caribbean and there meet a larger than life Russian character with his large extended family.  Soon he ropes them into a spy woven intrigue tale which you see largely through their eyes and their feelings and thoughts.  Worth a read.   A two thumbs horizonal on the FTUBRS*