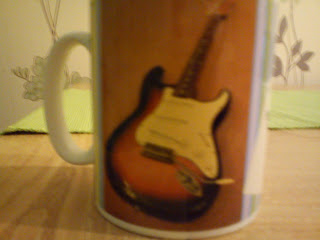 So I've had my first week in paid employment for a long time... I'm shattered!

Actually it has been ok, most of the week spent at HQ with HR, Finance etc. learning about the company and the processes etc. I did have a quick outing to a client for them looking at me for a possible assignment and I got that - which is good so soon I'll be earning for the company which is always a good place to get to quickly.

I'm out and about next week for the first couple of days to meet others who work for the company and meet them and learn about their experience and current work them I'm off to the client for a 3 day meeting that will kick off my assignment.

So sadly I think I will be very very busy so unfortunately I might be less on here and not able to visit all of you so frequently.
Posted by Furtheron at 10:15 5 comments:

It is very sad news - Gary Moore the great Irish rock/blues legend guitarist has passed away.

I've been a fan of Gary's for years - his tone, skill and songcraft stand head and shoulders above many others. Also Gary never wanted to be pigeonholed, rock, blues, jazz rock he tried them all... blues rock was his home and where he excelled but Gary never stood still. Try Different Beat an album he made when influenced by dance music from Fat Boy Slim etc. also Variations with Julian and Andrew Lloyd Webber again showing his great versatility.

I was privileged to see him several times. My sons first ever gig was to see Gary Moore with me at Folkestone some years back. I first saw him live with John Sloman singing back in the very early 80s I think.

I can't say more - great great man who will be sadly sadly missed. Thank you Gary for the gigs and music we salute you.

My gig review of the last time I saw Gary live is here from April 2009.

How to remember him but with one of his signature tunes....

Could there have been a better start to the weekend? That was a pretty good England performance I thought. Soaked up the early dominance from the Welsh without conceding points and then slowly began to take over the game. The first try was excellent foresight from Toby Flood who was rightfully the Man of the Match - he played really well I thought, although Wilkinson was impressive when he came on as well, good kick when needed and he did one stunning tackle in particular.

We should have scored when we were on the line and that was frustrating, we didn't marshall ourselves or use the width - either would have been a certain 5 or 7 points. Still picky it was a good performance. We need to stop conceding so many penalties as well but again promising.... could this finally be the England revival we've all long for since 2003?
Posted by Furtheron at 10:27 5 comments:

The company that I worked for up until last summer was in the news earlier in the week. They have decided to close the site I used to worked at - completely. Lock, stock and 2,400 jobs by the end of next year. I can't say I was surprised since 2003 we went through wave after wave of redundancies. They were knocking down old buildings, trying to sell off others, closed all manufacturing on the site in 2007 etc. In 2009 they "mothballed" the office block I was in at the time and shoe horned us into a newer building, with 20% less seats than people on the basis that "not everyone is in the office at once". The writing was frankly on the wall. Last year a few more of us went and one of my old colleagues left the day before the announcement.

With the government changing the earliest you could retire and take your occupational pension to 55 rather than 50 I was looking at 7 years holding on hoping to get to retirement. I felt that the chance of the site making it to 2017 was remote - sadly I was proved right this week. I am glad I made the decision to go when that opportunity presented itself last year now. If the age had stayed at 50 I'd be there now praying/begging to be on any of the final close down projects to ensure that I stayed on.

Anyway - it is interesting isn't it. There is a furore in the local press about the job losses. They keep quoting the 2400 figure. But I think to myself, some of those will relocate, there is an office in Surrey I expect some IT folk will go there. So I doubt all 2400 will leave the company, the majority yes but not all. Also some will doubtless go to the USA - they are scientists and wherever they go they'll have to move so some will go there. But there is little mention of the hoards of other jobs, cleaners, coffee shop staff, catering staff, gardeners, maintenance, security, etc. Must be hundreds of them who work for the contract companies not directly but their jobs are as affected as those directly employed. Clearly they will be lucky if the companies that bought the lucrative contracts there find them other work.

I spent 19 years and 1 week working in that place so I can't say it isn't a big part of my life. I was very proud of the work we did there at times - it is no exaggeration to say that even though my part was small the work we all did there saved and improved thousands of peoples lives. I'll never see the like again.
Posted by Furtheron at 16:23 4 comments: