Another week... another hotel room

The slow settling in to the life of a wandering consultant is continuing. Back in the regular hotel, in another room... that looks not surprisingly like the one I was in the week before last. Last weeks one was a radical difference... only since they put in my an "accessible" room. I presumed this was because the week before that I'd done my back in and was walking around like Quasimodo!

There is little to write about here sadly... work, hotel, work, hotel, home... seems the pattern of the moment.

Had a nice weekend home though, we went to see The Script at The O2 - Daughter of Furtheron being completely made up by this, singing, screaming etc. Mrs F enjoyed it although she is not well at all - not like her. She has battled on through a nasty cold going to work when probably she shouldn't have, largely since others were off sick and she thought she needed to in. Well she has ended up with an infection... or two! Her throat is nasty and I think she has a nasty sinus infection given the pain she was in at times. She has finally succumbed and gone off sick got and anti-biotic and hopefully will be on the mend soon.

Other than than I watched the F1 race - so the new wing thing really did a lot to help encourage overtaking... not! My son with his physicist hat on tells me it is a fundamentally flawed concept. We'll see, maybe they can fine tune it, but when Button was clearly so much quicker than Massa around the lap the fact he couldn't pass with the new contraption had to make you wonder.

Oh and watched the Rally de Portugal too - I finally have subscribed to a TV channel something I've long resisted but with WRC on ESPN and live rugby on there too in the end I went that way. The coverage is better than the old Dave stuff - more action less talk. The live power stage this weekend was good as well.

Joe Bonnamassa's new CD turned up as well as Burke and Hare on DVD so those were a couple of other distractions.

So that is about it at the moment. Not sure I have the work/life balance right working 11 - 12 hours a day and staying away 3 or 4 nights a week but what are you supposed to do? I should be really grateful I've got a job.
Posted by Furtheron at 19:23 4 comments:

What is it all about?

You know the happenings of the past few days make you stop and think... well me anyway.

Japan - I can't begin to describe all that, how utterly awful and how it shows us that with all our technology etc. nature will have her own way. The nuclear thing is dreadful but sadly a consequence - build for a scale 8 earthquake and a 6m wave... not a 9 quake and a 7m wave. But all those people now freezing, no food, no heat etc. 21st century living wiped away in an instant.

Closer to home. My daughter has been nominated for captain of her swimming team - how cool. I'm not sure about the working away from home still - it is better than the stupid commute but I really miss being home and there is so much hassle in the organising of silly things when you are not about in the week - little domestic admin etc. it is a pain.

I found out that a guy who was working on the programme that I'm on committed suicide last year because of the stress of work. How so sad! It is just a flipping job.

As I've said previously this is teaching me a lot about what is important in the world for me.
Posted by Furtheron at 11:44 3 comments:

Hello to anyone still left who can be bothered to drop by to see whether I've fallen completely off the face of the earth or not. Sorry it has been a little ... er .... manic.

It is all the new job. I joined on 7th Feb, spent a week in the head office learning about the company, processes, policies etc. On the Thursday of that week I was introduced to a client as a potential for a new assignment and new role they needed. I was accepted for that and so the next week I had two days out and about meeting a few others in the company and finding out about them and what they were doing then on the Wednesday I was straight into the new assignment on a three "bootcamp". I then started the role with the client team on the following Monday. All following so far? You're doing better than me then! That was three weeks ago... only three weeks! The role is officially based in one team at one location but I'm "deployed" to work with another team who are largely based at another office about 20 miles away. So I'm back and forth between the two locations.

Now I thought I'd try to commute. However both are not easy from my location combinations of either minimum three train journey's into and out of London or Train, tube, train, bus. I was commuting for 5 hours a day. That wasn't working so last week I decided I'd travel up at least for some of the week. I did that this week driving up at 5am on Tuesday and getting back Friday evening. It was a lot better - the day isn't punctuated with the awful commute and I can work later and get more done.

Initially the assignment is until the end of the year and might well go into next year. So this arrangement will have to be in place for some time. I know many people have this weekend start/end commute but it is new to us as a permanent thing, I've done plenty of weeks away in jobs before but never as long term as this.

So it is all a bit new for us. I don't like not being home during the week but I really don't see an option the daily commute would kill me eventually. I have thought about trying to get agreement for one day a week at home, a Monday would be good from my point of view but this month is especially busy on the programme I'm involved with so the earliest I can think of that is probably going to be around Easter I think.

So... other stuff. I never put up about the Lamb and Flag gig I played on the 19th Feb. It went well I think. Nice venue, packed with punters which was really nice to see. I got a reasonable level of applause / interest. Thanks to my ever suffering wife, daughter, brother, sister-in-law and neice who once again gave up a Saturday night to come along to watch. Also to Toby Burton of Rock-Til-You-Drop for coming along to support me and Pat Begley. Pat followed me on and was frankly superb that night! He is a man of great talent, excellent player and writer and a cutting wit! Check him out. I have a facebook page now with my music on and photos, occasions posts etc. please come along to there and "like" me, or be my friend if you are that bold!

I had a couple of hits of sad news in the past three weeks as well. A friend who has struggled with her alcoholism for the last few years, she first came to AA about the time I first sobered up sadly succumbed to the disease and passed away the other day. Sadly I because of the new job I couldn't get to her funeral, a reminder of how dangerous my condition is. Also I tracked an old work colleague done, he know lives in California and I'd not spoken to him in nearly 20 years. I wondered if he had contact details for another colleague of ours who I really wanted to get back in touch with as well - sadly he had to tell me that he had passed on last year when an undiagnosed heart condition meant he suffered a fatal heart attack. He was some years younger than I as well. I was very upset by that. These events have made me thing a lot. I'm very grateful to have the job but we'll have to see if the new lifestyle is a happy one, if not you know what there are much much more important things in life than a wage packet.

So apologies for not being about but as you can see it has been a bit of a busy time.

Here is a photo from the Lamb and Flag gig from my official photographer of the night... my daughter 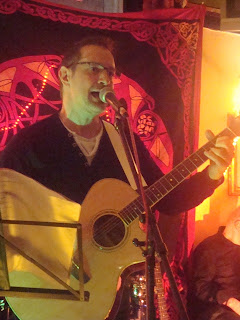