I've been setting up some projects now I'm "retired".  However weather, health and other stuff keeps getting in the way.

However progress has been made.

I built a new workbench!  I think I said I was going to do this ages ago - at least a year... or two! 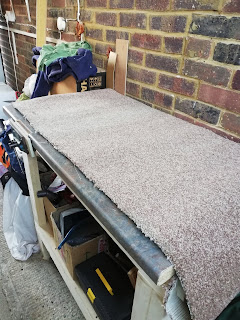 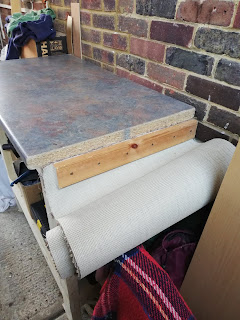 I bought some lengths of 4x2in (well the metric equivalent) from the local store which they delivered back in January.  I then created a frame - the cross braces (front to back) are just butted against the front frames where I joined the long cross bits to the legs via half lap (I think that's what it's called) joints.  They hide the screws hold the cross braces in.  I cut some MDF to fit as a bottom storage shelf and the top is an offcut from our kitchen worktop that has been sat in the garage for 15 years waiting for me to do this!
The vice is an old one I liberated from my father-in-laws garage last year when we had to sell that house after my mother-in-law went into a care home.  It's not huge but useful and I recessed the edge to get it to fit and mounted some laminated ply (about three bits to get it right) underneath so that the top is flush/lower than the work surface - again considering for guitar use so there's nothing for them to bash and get scratched.
The carpet is a bit of offcut held in place with a wooden batten.  This allows me to have it on hand for when I need something soft to put guitars on.
Keep watching here as there is a new project about to be started on it any day now...
Posted by Furtheron at 13:39 2 comments:

I'll start with a declaration of interest.  Kevin Lane is an old colleague and friend who I hold in very high regard.  So I read this since it is his first novel that he has self published.

Infinite Dream is a thriller novel set in the rarefied world of the mega rich and powerful.  We're introduced to our hero Jack Hallis.   Jack is a very rich man having made his fortune in spotting potential blockbuster drugs in development and buying them up.  He is autistic and to a degree reclusive, in that he doesn't mix much and his work dominates his life.  However this is turned on it's head when he meets Corrine Azzard who works for the UN and is looking to secure funding from rich folks like Jack.  Corrine attracts him like no one before and so he starts to look at courting her.

He falls in love and she persuades him to use his riches to tackle the corruption that stops UN aid reaching those that really need it.  By now she's resigned from the UN angered by the acceptance of the corruption and the pair of them set out to fix the problem.  However on the eve of Jack and her launching their new venture Corrine is killed in an accident and Jack in a fit of grief is also seriously injured.

The themes of the novel then look at life after death.  As Jack's own near death experience (NDE) makes him believe the afterlife is real and that by experiencing a NDE he can get back close to Corrine.  Corrine's late father's work on this also attracts Jack's interest.  However also in the back is a shadowy underground organisation that is plotting against Jack and others like him.  Is there where the real power in the world is held?  By unseen unknown ruthless individuals who continue to play out against anyone they see threatening their wealth etc.

It is a gripping tale as you relive the events that led to Corrine's death and Jack's injury.  And as you watch Jack regain control not only of his physical and mental capacities but his wealth as the unseen cartel plots in secret against him.

One one criticism of the book is at the start the back and forth in timelines as you learn of some of the back story of Jack and Corrine can be confusing at times until it settles down to a single time thread following the accident.

The themes are complex and thought provoking.  Is there unseen secret cartels at this very moment plotting away on conference calls that will affect the lives of millions if not billions of people and who will stop at nothing to get their will imposed on the world?   But also the investigation of NDE, the afterlife, whether there is some overriding moral code in the universe that come the time we're admitted to that afterlife, or not, we will be judged against?  Could, or even should, there be a way to systematically review people's lives and contributions to society available online to allow us to review ourselves and others against that moral code?

The novel builds on Kevin's earlier non-fictional work "The God Contention" which looks at some of these profound questions in a more systematic way.   The book is a good read if you're not interested in the more philosophical points of view or could be a gateway in to Kevin's other work.

Posted by Furtheron at 12:00 No comments:

I know I'm a bad blogger and not been on here for a while.  But I was annoyed to read today that with the demise of Google+ any Google+ comments have been lost of the blog.

That's mostly mine then!  Since I moved to Google+ some time ago when Google pushed it as the way to get more traffic to your blog.... that never worked either.

Oh well - so back to the blogger I remember of old then... without all my replies to people's comments!
Posted by Furtheron at 11:38 1 comment: